The revival of Sibenik’s city centre

Up until recently it was just a parking lot – now, the redesigned square also houses Croatia’s first water clock 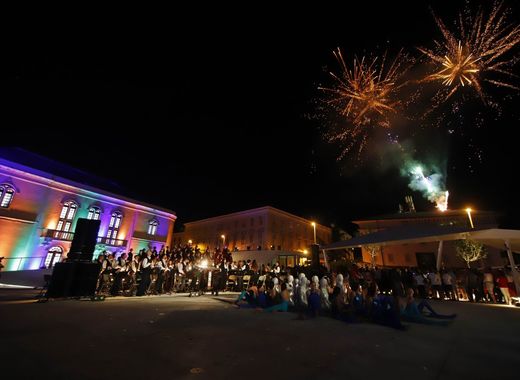 After decades as serving as a mere parking lot, Sibenik’s old city centre has once more returned to its glory days. Thanks to the efforts of local officials, Šibenska Poljana has yet again been named the town’s main square.

Changes to the benefit of the entire city and its citizens

For years Šibenska Poljana had acted as a simple parking lot instead of being at the service of citizens. Now, following massive redevelopment efforts, the parking lot has been moved entirely underground – right beneath the square so as to not adversely impact the local transport network and “ecosystem”.

In the place of the parking spaces, the entirety of Šibenska Poljana has been cleared up and now stands ready to host all manner of activities. The first of hopefully many such events was the grand opening of the newly designed space at the end of June. The ceremony was attended by hundreds of locals, members of the local administration and all kinds of performers who were tasked with breathing new life into the old, yet new, main square of Sibenik.

"We have arranged our Poljana carefully and with measure, and especially with a sense of duty and respect for the generations of Šibenik citizens whose heirs we are. It was this feeling and wisdom that preserved them for more than 950 years here, on the hard rock, just as the song says. Welcome to Poljana, which today is not just a square. Below it is a modern garage with three floors and 256 much-desired parking spaces. We decided to be right there and there were no dilemmas, excuses, justifications of points for and against. We decided not to live by the old, in its time successful, but to overcome boundaries and give the city a square and a garage in one. And it paid off!” stated the mayor of Sibenik Željko Burić.

Another point of pride of the square’s redesign is the fabulous water clock – a unique contraption without parallel in all of Croatia which serves not only to beautify the area but is also extremely practical as it keeps an accurate report of the current time – just like a regular watch.

The innovative contraption is unique in all of Croatia.

Powered by an underwater mechanism, the two water jets that spin around the fountain and act as the clock’s “hands” promise to always be accurate, no matter the time of day, as the entire fountain lights up during the nights and evenings.