A must see architectural gem in Bucharest 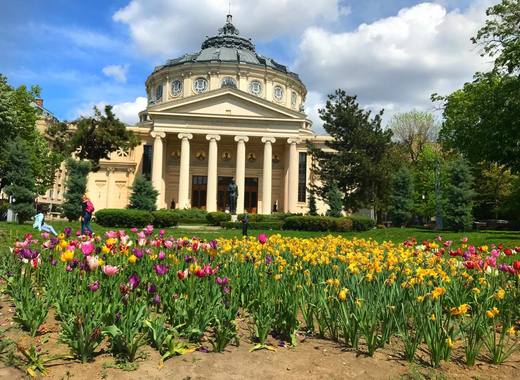 Located in the heart of the Romanian capital, Bucharest, the Athenaeum is an important cultural center and a must see architectural gem. With its majestic baroque cupola, the stunning edifice is surrounded by beautiful, picturesque gardens. Named the Romanian temple of arts, it is an architectural jewel the uniqueness and merits of which have been acknowledged by the the building's classification as a historical monument in 2004 and its becoming a part of the European patrimony in 2007.

Located  in the real centre of Bucharest, on the Victory Avenue, the Romanian Athenaeum is a tourist sight the importance of which does not come down exclusively to it being one of the most eye-catching architectural marvels in Bucharest, but also to the fact that it's home to one of the oldest and most important cultural institutions in Romania, a major contributor to the artistic scene of the capital: the George Enescu Philharmonic Orchestra.

Built between 1886 and 1888, the Athenaeum was designed to accommodate the specific activities carried out by the Romanian Philharmonic Society. At present, the Romanian Athenaeum is one of the main venues involved in organizing the celebrated George Enescu International Festival. It is also opened to tourist visits.