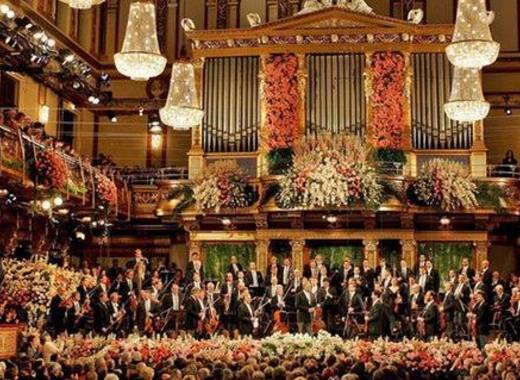 New Year's Concert by the Vienna Philharmonic is perhaps the most famous concert in the world is broadcast by television to an audience of millions in over 90 countries. The Vienna Philharmonic gives its annual New Year's Concert in the Golden Hall of the Musikverein. The Golden Hall is considered to be not only one of the most beautiful halls in the world, but also one of the best in terms of acoustics. For the New Year's Concert, the hall, which is built in the historical style based on the model of antiquity, is decorated with wonderful flower arrangements. Columns, caryatids and gable reliefs create the impression that a temple of music has been created here.

The New Year's Concert by the Vienna Philharmonic combines the best of the best. The musicians play right at the top of the league of leading international orchestras - they are the Vienna Philharmonic. The conductors are also amongst the best in the world. A different conductor is invited each year, including Mariss Jansons (2016), Gustavo Dudamel (2017), Riccardo Muti (2018) and Christian Thielemann (2019). Christian Thielemann, Chief Conductor of the Staatskapelle Dresden and the Director of the Salzburg Easter Festival, will lead the Vienna Philharmonic Orchestra in music of Carl Michael Ziehrer, Josef Strauss, Josef Hellmesberger, Jr., Johann Strauss, Jr., and Eduard Strauss.