The works in Sagrada Familia legalized after 130 years

The permit was first requested in 1885 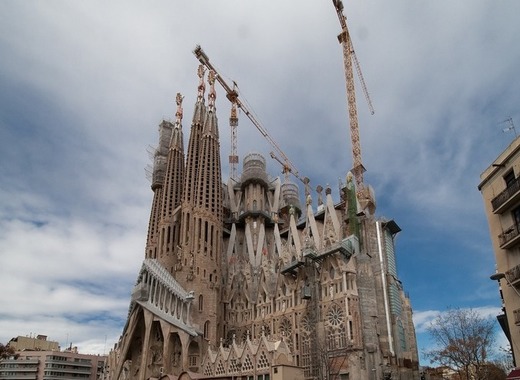 Work on the Sagrada Familia finally received the green light this Wednesday. The world-famous temple in Barcelona, capital of the autonomous community of Catalonia in Spain, needed special permissions to be renovated, report from the Barcelona City Council. The works have been ongoing for decades, without official permission from the local government. It was in 1885 when the permission was requested in the Sant Martí de Provençals City Council, but the question had never been addressed until now, more than 130 years later.

The agreement reached is the result of the collaboration between both Barcelona City Hall and the temple and has involved the drafting and approving of a modification of the Metropolitan General Plan and the development of a special urban plan for the regularization of works. The Construction Board of Sagrada Familia has paid 4.6 million euros, which correspond to the tax for buildings, facilities and works (4.3 million) and the license fee for works, which exceeds 240,000 euros.

Parallel to the works license, the City Council has also processed the permits for activity and the uses of the basilica. The main activity of the building is the one of a visitor's worship centre, open to the public at an extended schedule in comparison to liturgical services.

The license foresees a great rehabilitation with an increase of volume and the execution of the works of construction of the temple, that consists of the main building, several towers of different heights and two floors of basements. The maximum floor area is 53,000 m 2 with a surface built on slope that is just over 41,000 square metres. The license also describes a construction of the temple by stages and foresees a period of total execution that will finish in 2026.

Sagrada Familia is one of the most popular buildings in Barcelona, ​​with 4.5 million annual visits to the interior of the temple and about 20 million in the surroundings. This intensity of the use of the public space as well as the public transport of the area has led to the signing of commitments to improve citizen services as well as the public space.  The agreement, signed in October of 2018, includes a contribution from Sagrada Familia worth 36 million euros to finance the municipal expenses that related to its activities, and will have a direct benefit in the improvement of citizen services and the maintenance of space and environments.

In particular, 22 million euros will be earmarked to finance the public transport network; 7 million to improve accessibility to the subway, with actions that include options such as building a direct access to the temple or outside and extending existing accesses; 4 million to the redevelopment of the streets nearby, and, finally, 3 million for the cleaning and maintenance of the streets, the security and the civic agents.