The United Nations World Tourism Organization and Spanish authorities at all levels consider joint actions to mitigate the depopulation processes, particularly grave in the rural areas of Spain 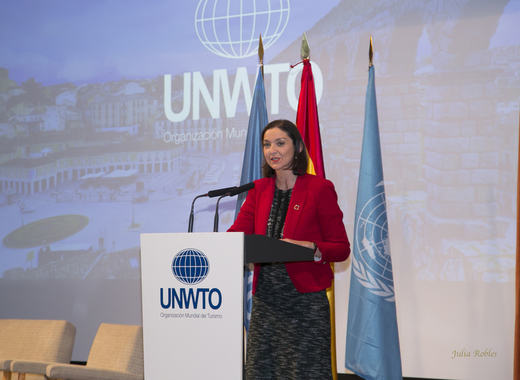 Last week the city of Segovia welcomed representatives from the World Tourism Organization (UNWTO), national, regional and local authorities to discuss approaches to meet the serious demographic challenges in the country during the forum "Facing the Demographic Challenge through Tourism and Innovation". Inaugurated by the Prime Minister Pedro Sánchez and attended by the Minister of Industry, Trade and Tourism, María Reyes Maroto, the President of the Junta de Castilla y León, Juan Vicente Herrera,  the Mayor of Segovia, Clara Isabel Luquero and UNWTO Secretary-General, Zurab Pololikashvili the forum highlighted namely tourism and novelty as perspective approaches to the depopulation, which is particularly grave in the Spanish rural regions.

More than a hundred people active in the political, business and research sectors attended the forum interested to discuss how the tourism sector can combat this demographic phenomenon. “The UNWTO wants to work alongside Spain to turn the discussion on the challenge of rural depopulation into a conversation about the opportunities that the rural environment represents," said UNWTO Secretary-General Zurab Pololikashvili. "The 2030 Agenda is committed to leaving no one behind, including rural areas and their inhabitants." Pololikashvili then went on to underline that the sector did generate one tenth of the jobs worldwide in 2019, which is yet another reason why the organization is devoting the year especially to education, the development of vocational skills and employment, which shall ultimately contribute to increased perspectives for professional development.

For his part the Prime Minister Sanchez put forward a vision for increased opportunities in the interior regions of Spain through rural tourism, digital transformation and new models of economic activity. With this regard, the National Strategy will be subject to review in order to address better the demographic challenge as tourism in Spain is a key driver for the local economy and there is still place for improvement, especially in the internal parts of the country. Finally, several successful cases of public-private partnerships were discussed during the event that took place on 26th of March in Segovia with focus on smart destinations, among others.