Watch footage from yesterday’s demonstration for the climate 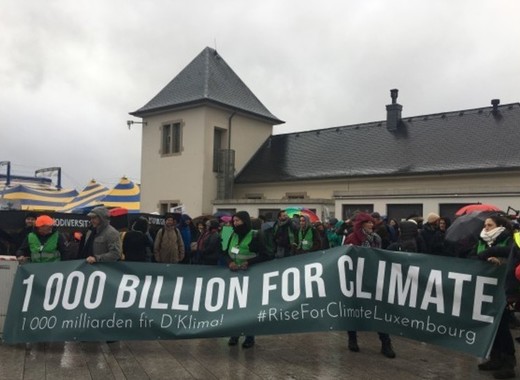 Several cities around the world participated yesterday, the 8th of December, in one of series of events dedicated to climate changes. Hundreds of parallel actions have been organised in Poland, France, Belgium, UK, Sweden and other countries around the world. We joined the march in the capital City of Luxembourg, which passed under the slogan “100 Billion for Climate” and aimed to raise awareness of the seriousness of the problem of global warming. Hundreds of locals and visitors gathered to say “No” to the abuse with nature and to declare their disapproval with the current state of events.

The latest climate march is part of series of events and is realised in the context of the ongoing 24th edition of Conference of Parties (COP24) to the United Nations Framework Convention on Climate Change which takes place in Katovice (Poland) between 2 and 14th of December. The protesters thus require more courageous decision-making on the matter and efficient implementation of the Paris Agreement, which states that the limitation of global warming should be fixed to a maximum of 1,5 degrees Celsium.

In order to attract wider public attention, the organisers of the demonstration and their followers had shown creativity in poster design. Some of them red “R.I.P. biodiversity”, “R.I.P. future generations”, their authors carrying black coffins. “To Change Everything, We need everyone”, “I am a drop, we are a wave”, “There are no jobs on an empty planet”, “The petrol is catastrophe” red others. In the context of these demonstrations, it should be reminded that Luxembourg has particularly low fuel prices, compared to those of its neighbours, which turns it into a big fuel exporter for transiting visitors.

Watch video from the march below: