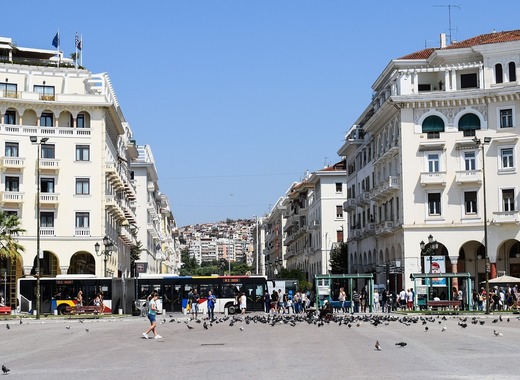 Last year the Greek government took on the unenviable task of cracking down on smoking in public areas. While legislation prohibiting the vice had already been in place for a decade, businesses and venues had not been particularly compliant – mainly due to the low fined and authorities’ reluctance to enforce them.

It all changed, however, in November 2019, when the new Greek government made clear its intentions to combat smoking in the country. It revamped national legislation and raised the fines that will be imposed on those who decide to go against the ban. You can find out more about the concrete measures undertaken by the Greek government in our previous article on the subject.

With central authorities demanding stricter adherence to the rules and with their newfound zeal of enforcing the rules, local administration across the country have also been forced to crack down on smoking.

The most successful municipality to do so has been Thessaloniki. Despite being famous for its vibrant nightlife, the country’s 2nd largest city has seen the sharpest drop in in-door smoking in all of Greece.

Thessaloniki’s bars, pubs and restaurants have been eager to enforce the new regulations in order to avoid the wrath of authorities. In the last two months of 2019, nearly 600 random inspections were carried out by police across the whole of Thessaloniki – only 46 violations were registered, according to GreekReporter.

Business-owners’ compliance with the new regulations should come as no surprise. The new laws envision the prospects of taking away operating licenses for repeat offenders – something that no one wants to look forward to.

The 90% estimated success rate in Thessaloniki is a real success story for Greece’s Ministry of Health that was the driver behind the changes, proving that even the worst habits can be subject to change with proper motivation.