This year Dudelange is the European Town of Sport. See why. 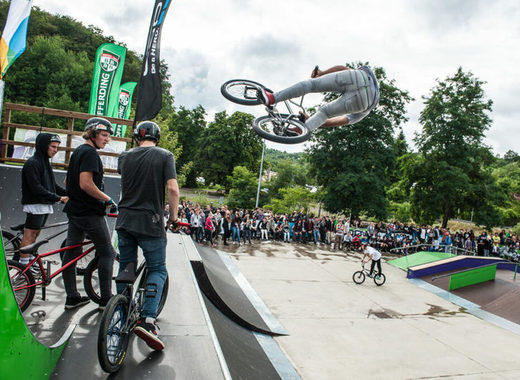 In competition with other European towns, Dudelange has managed to win the prestigious label of European Town of Sport 2019 last December. The title given to towns below 25 000 inhabitants was awarded followed a visit by a European delegation with a mission to evaluate the existing infrastructure of the Luxembourgish city, which is the result of joint consecutive efforts to modernize the available sports facilities and thereby to enable more people to access quality sports activities.

Winning a title of this rank was no mean feat: on the contrary, it requires dedication and hard work put by both sports practitioners and decision-makers. For instance, the René Hartmann Center, which reopened in 2015 was one of the positive examples to be mentioned. Designed for high-level sports, it houses two large halls, one for basketball and the other for handball. The Dudelange pools were also noticed, as well as the stadiums and mini-stadiums, the mountain bike trails, the Schmelz skatepark, or the outdoor facilities dedicated to seniors.

In addition to classic sports such as football or tennis, it is possible to practice in the town a multitude of disciplines, among which American football, or African dance. The investment of the associations, but also of the coaches and volunteers was also put forward. As Loris Spina, alderman in charge of sport, mentioned that the practice of physical activity by all Dudelangeois is one of the highest priorities of the city: "We believe that sport must condition the life of a good part of the population and that, in addition to its health benefits, it plays an important role in creating the social link".

Mayor Dan Biancalana emphasized the importance of developing the taste and culture of a balanced physical activity which brings about well-being. In addition, he highlighted the fact that the City was doing everything possible so that everyone could practice sport in the best conditions. In order to promote this label, a multitude of sports activities will be organized within Dudelange throughout the year, with an emphasis on the importance of sport at school.