About 20% of all buses on the city streets will be electric in two years, Mayor Yordanka Fandakova promised 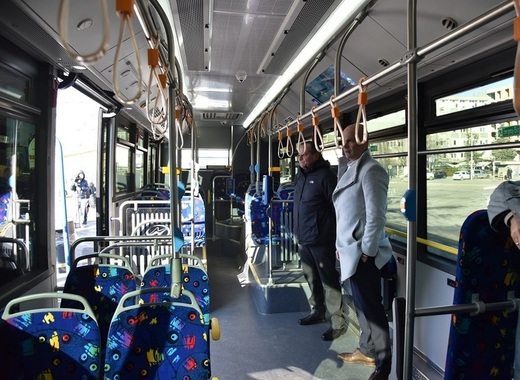 Bus line 123 in Bulgaria’s capital Sofia is being extended by six more stops and 3 new electric buses will run along the route starting January 17th. This was announced on Tuesday by Sofia Mayor Yordanka Fandakova. Thus, the line connecting the Simeonovo gondola lift (starting point to Vitosha and the ski area around Aleko hut) and Slatina quarter will reach as far as Geo Milev bus station.

The new bus line will have improved intervals between buses, which will make it easier for tourists, said Kristian Krastev, the new deputy mayor of Sofia Municipality responsible for Transport and Transport Communications.

This is the third bus line the municipality has launched. The first two - lines 9 and 306 - were operational by the end of 2018. Fandakova promised that by the end of this February two more e-bus lines will be launched. New electric buses will also run on lines 84 and 184, which connect the city center to Sofia Airport.

According to Fandakova, who began her fourth term as mayor of Sofia, by the end of 2021, about 20% of all buses on the city streets will be electric. "10 new e-bus lines are on my agenda for the new mandate. This is a good achievement for our city, which is developing, in terms of electric transport, in par with many other European cities," said Fandakova, quoted by the municipality's press center.

The zero emission electric buses are particularly suited to Sofia, Europe's most polluted capital with fine particulate matter. Procuring them is more expensive than gas and diesel-run buses, but their operating and fuel costs are several times lower.

Varna is increasing its electromobility

60 new electric buses will upgrade the fleet of the municipal transport company in Varna, announced the mayor of Bulgaria’s “maritime capital” Ivan Portnih, quoted by kmeta.bg. The project, worth BGN 85.4 million (EUR  43,7 million), also envisages the purchase of the necessary charging stations for the batteries of all buses to be charged overnight at the depot. The renovation of the bus fleet is among the 20 key projects that the Varna municipal administration will be implementing this year.