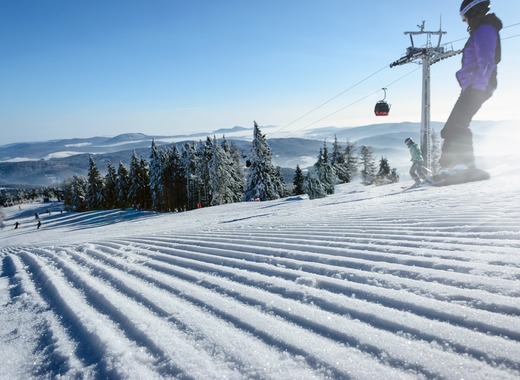 The Municipality of Braşov, in central Romania, plans to expand the Poiana Braşov ski resort. The aim of the project is to accommodate the growing number of skiers who crowd to its slopes every weekend. The plan includes a 30-hectare expansion and another new 10 km of slopes, as well as new means of cable transport (a gondola lift and a chairlift), lighting infrastructure for them and parking places.

The study regarding the extension was made available to the municipality by the Poiana Brasov Tourism Association. It entails the expansion towards the town of Râșnov, in the Cheișoara area.

According to the Braşov City Hall, the total investment is estimated at around 32 million euros. The municipality has already provided RON 250,000 (52,300 euros) in the 2020 budget for the feasibility study and the technical project. following that after the completion of the documents, the implementation of the project will start.

2.3 million skiers for over the past 3 winter seasons

The mayor Braşov, George Scripcaru said that this investment is intended for lovers of winter sports, but also for other categories, who want leisure activities. He added also that the extension of the ski area is very necessary, the figures from the tourniquets show this. Almost 2.3 million skiers have used the cable transport facilities in Poiana Brașov over the past 3 winter seasons.

Currently, the slopes can accommodate around 4,000 people on an everyday basis but more often than not, there are up to 5,000 skiers on the slopes of the resort. After the expansion, the slopes in Poiana Brașov will total more than 30 kilometres. With the new investment, Poiana Braşov ski resort also aims to be able to host the Winter Youth Olympic Games of 2028.