Today Manneken Pis is in the costume of Europe

The symbol of Brussels folklore, gets a costume at major events 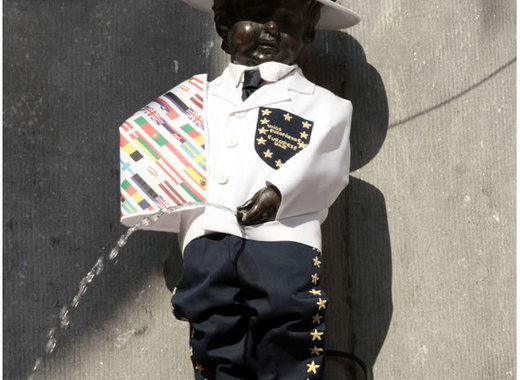 Manneken Pis, the symbol of Brussels folklore, gets a costume at major events. Today, Manneken Pis is dressed like a European, he is celebrating Europe Day.

Manneken-Pis is a landmark small bronze sculpture (61 cm) in Brussels, depicting a naked little boy urinating into a fountain's basin. It was designed by Hieronymus Duquesnoy the Elder and put in place in 1618 or 1619. The current statue is a copy which dates from 1965. The original is kept in the Museum of the City of Brussels. Manneken Pis is the best-known symbol of the people of Brussels. It also embodies their sense of humour and their independence of mind. The statue is located in the centre of Brussels, only five minutes walk from the Grand Place, at the junction of the Rue du Chêne/Eikstraat and the pedestrian Rue de l'Étuve/Stoofstraat.