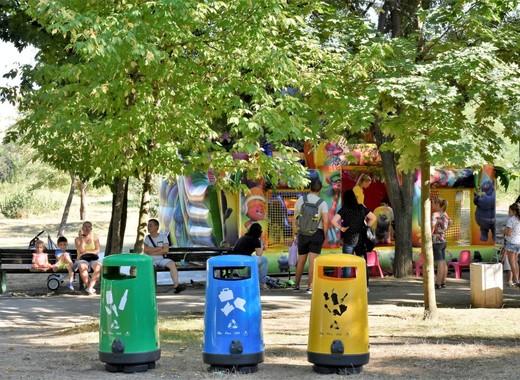 On Tuesday, July 28, the Bulgarian Municipality of Plovdiv, Trakia district, BG Be Active and the Traffic Police Sector launched a series of educational events dedicated to the creation of better urban spaces. The event "Plovdiv - a cleaner and safer city that we are building together" was carried out with various initiatives and with great interest.

The first of a series of events with educational games and entertainment for children and parents was launched in the "Park of the Repressed" in the "Trakia" region. All activities are dedicated to creating good habits and attitudes among teenagers towards the city in order for them to live in a better, cleaner and more beautiful town, with less traffic and accidents.

During the event, the organisers from BG Be Active, in partnership with the region "Trakia", set up baskets for separate collection in the park. This way, partnerships are being forged between citizens, organizations, businesses and institutions, through which caring for the public environment becomes an incentive for civic activism and responsibility.

The initiative by BG Be Active is part of a plethora of activities in the _Place Bulgaria program, for the improvement of various places in the city and the country, as well as for reducing the pollution of the urban environment. Similar events will be held in three of the districts of Plovdiv.

At the traffic safety site, employees of the Traffic Police Sector - Plovdiv will train the children by giving a lesson in the form of a game for proper traffic behaviours on the roads, in which the kids can get involved. There will also be real-time simulations of how they should move at intersections.

During the events, the BG Be Active Association also held a series of "Clean Games" to educate adolescents about proper separate waste disposal. Through fun educational activities, kids easily remember where and how to dispose of different types of packaging.

The next event of the initiative will be in the "South" district of Plovdiv, on the children's playground for traffic safety. It will be held on 6 August from 18.00 and will again feature songs, dances and interesting lessons for the little ones.