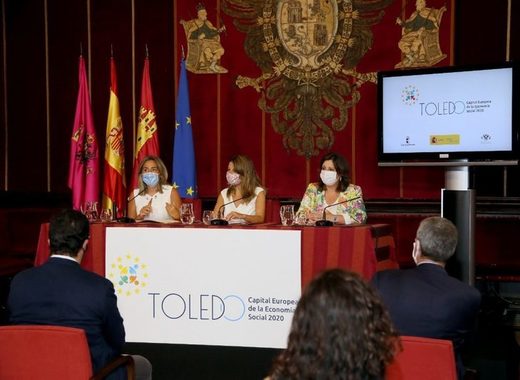 The Spanish city of Toledo is the European Capital of Social Economy for this year. This distinction was formally celebrated on 23 July at City Hall with the presence of Yolanda Díaz, Spanish Minister of Work and Social Economy, Milagros Tolón, Mayor of Toledo and Patricia Franco, Minister of Economy in the Government of Castilla-La Mancha.

Social Economy accounts for 10% of the Spanish GDP

Toledo was designated as the European Capital of Social Economy following the Spain’s turn to take up the rotating presidency of the Luxembourg Declaration. This document, signed in 2015, seeks to provide a roadmap to strengthen enterprises that are involved in the social sector on the continent.

Social economy, often also called the Third Sector, concerns all the economic activities which are not undertaken by private or public enterprises. The work of entities, such as non-profit organizations, associations, co-operatives and charities, still remains vastly overlooked and hidden from the larger economic considerations by governments and free market.

Although, these entities contribute some 10% of the Spanish GDP product and employ 2.2 million people in the country, they are still plagued by many issues, such as lack of visibility and access to the the larger EU market.

Toledo was chosen as the Capital for 2020 due to its long history of civilizational dialogue and inclusivity. Following the COVID crisis, the city adopted a plan to the cost of 15 million euros which will seek to revive the economic and social life. Its main beneficiaries will be social economy organizations, self-employed people and small and medium enterprises.

“We are essential actors for the reconstruction, because we are involved with the local economy and we know the needs of our neighbors and how to reach them immediately and in personalized manner,” said Mayor Tolón, adding “We have always found great allies in the Social Economy entities”.

On her part, Minister Díaz, who had committed earlier this year, upon accepting the seat of the rotating presidency, to strive for better visibility, diffusion and stability for the Social Economy enterprises, commented that she would like to see Toledo becoming the main stage of this economic transformation.