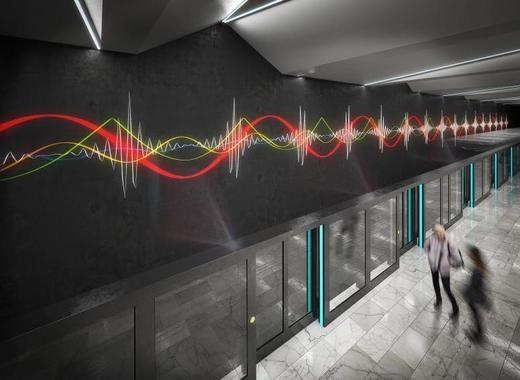 Prague has recently unveiled what three future stations of Metro line D will look like and the results are nothing short of spectacular. Future travellers on the Czech capital’s line D, connecting the centre with the south-east neighbourhoods are certainly going to have an interesting time waiting for the train to arrive, thanks to the decorations by top Czech artists.

The competition for the design of the decorations of three of Prague’s future metro stations was open by Metroprojekt, Dopravní podnik Prague (DPP) and the capital city of Prague under the auspices of the National Gallery. At least five artists presented concepts for each of the three stations - Krč Hospital, the Krč Railway Station and Nové Dvory.

The projects developed by the Czech artists Stanislav Kolíbal, Jiří Černický and Vladimír Kopecký came in first place, thanks to their successful incorporation of the specifics of the architecture and the establishment of a link to the history of the locations by giving them a modern outlook.

"The construction of the new metro line D is one of the largest transport projects that will affect the lives of the capital and its inhabitants in the coming decades. Hundreds of thousands of people pass through the Prague metro and its stations every day, so it is important for us that Prague residents feel comfortable when travelling on the new line.

I am glad that art competitions are taking place. Thus, Prague does not compromise in the field of aesthetics due to the ambition to realize modern visions and to present new metro stations that will withstand global competition" said the mayor of Prague Zdeněk Hřib quoted by the municipal website.

The artistic solution of the Novodvorská station consists of two nine-meter-long reliefs above the entrance to the escalators. The main motives are circles and squares, according to the author Stanislav Kolíbal. Image: Jiří Černický / City of Prague

Vladimír Kopecký explained that the Nádraží Krč station represented a challenge, as its platform is not underground. Different times of the day can this way affect the perception of the artwork. He finds this both refreshing and exciting. Image: Jiří Černický / City of Prague

Line D of Prague’s metro is expected to have 9 stations. More than two-thirds of its itinerary is planned to be opened to passengers by 2027.