Trnava gears up for launch of shared cargo bikes scheme 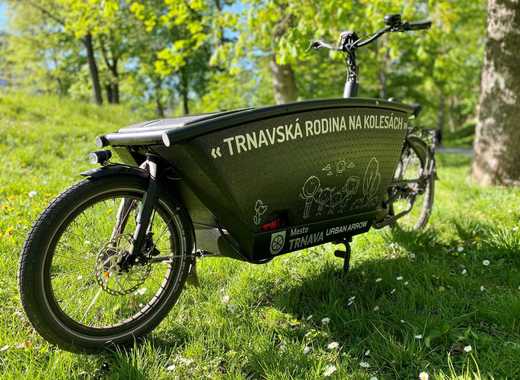 The Slovakian city of Trnava is getting ready to launch its brand new initiative – namely an off for shared cargo bikes that will be available to families in the area. But before the official deployment of the service, the municipality wants to perform exhaustive tests of how it functions and aims to collect as much feedback from residents as possible in order to improve it in the near future.

Cargo bikes, in essence, are larger bicycles that are, by design, meant to transport larger and heavier loads – including persons. Trnava has already purchased three such vehicles and offers them to families with young children who are looking for new ways to explore the city and its surroundings together.

The bikes can carry a maximum load of 150kg and are powered by an electric motor which helps the cyclers themselves. Yet to improve the quality of the service, officials are on the lookout for 50 volunteers who are eager to test it and provide feedback.

Those willing to sign up must, however, meet four key conditions – they must be permanent residents of Trnava and over 18, they must already be registered for Trnava’s bikesharing scheme, they must be parents of children (as the service is specifically meant to be used by families) and these children must be no older than 3.

"We offer shared city cargo bicycles to Trnava families with children as a benefit. This type of means of transport is very popular abroad, especially in Denmark and the Netherlands, and we believe that it will also appeal to the people of Trnava, " said the mayor of Trnava, Peter Bročka.

Those who are interested in testing the service and meet the conditions can easily submit their applications on the city’s website, after filling out a quick questionnaire. It must be noted, however, that participation in the tests would require the temporary deposit of 50 euros which will act as collateral should the vehicles be damaged during trials.