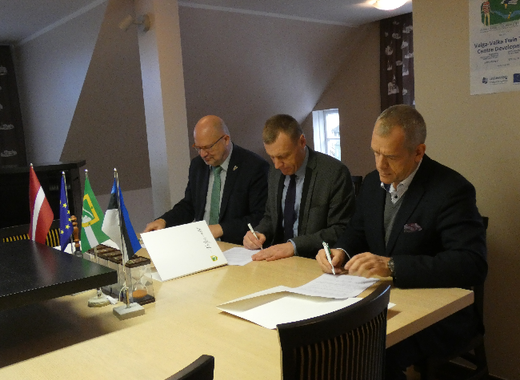 But after Latvia and Estonia secured their respective independence, the town was separated into two by a border. In Latvia, the town retained its name Valka, while in Estonia it was called Valga.

The two cities share a special bond, which they celebrate each year. This year the event was under the slogan “One Town, Two Countries” and over its course the public transport networks of the two cities were interconnected and allowed for travel across the open border, separating the countries.

Taking it one step further

Local administrations of the two cities are ready to get their relationship to the next level. Recently, the governments of Valka and Valga signed a common plan for the creation of a joint City Center, called the Valka – Valga Twin Town Center.

The project will renew and develop a common public space, covering both the historic downtown area and the pedestrian street in the two cities. The aim is to create a cosy and unique public space for city residents and visitors.

The construction works will include the construction of Valka central square and the creation of pedestrian streets connecting the central squares of Valga and Valka town. The pedestrian street combines two visual and symbolic landmarks - the St. John's Evangelical Lutheran Church on the Estonian side and the Lugaži Evangelical Lutheran Church on the Latvian side.

The two administrations believe that the renewal project will not only celebrate their common history but will also lead to an increase in economic activity. The creation of such joint spaces would allow for new kinds of entrepreneurship to flourish and take hold in what once was just a single city.