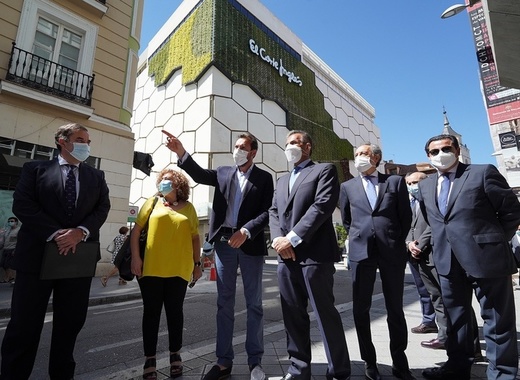 The Valladolid City Hall, the European Union and El Corte Inglés got together to provide funds and transform the outer walls of one of the city´s department stores into a vertical garden. The project, called URBAN GreenUP counts with 351 square metres of greenery and 14 042 plants and is expected to transform the visual environment in the central neighbourhood.

The El Corte Inglés store building was chosen for the innovative project because it fit all the necessary requirements. It had large non-transparent walls which were also considered strong enough to withstand the added weight of the gardens, and it was not under any kind of conservation or protection measures as other properties in the historical centre.

Old cities, such as Valladolid, whose central areas were planned and built in the Middle Ages tend to present a particular challenge for environmental renovation. It is often impossible to tear down buildings and open up new spaces for parks and wider streets.

The vertical garden is considered to be beneficial in several ways. The new façade provides a much needed island of greenery in the centre of the city which is expected to:

This kind of solution was carried out under the auspices of the EU program Horizon 2020 which provided EUR 130 500. Additional EUR 79 500 were given by the Valladolid Municipality, and El Corte Inglés added another EUR 60 000, destined for the maintenance of the smart irrigation system constructed behind the facade.