Vichy celebrates 2000 years of history with a major exhibition 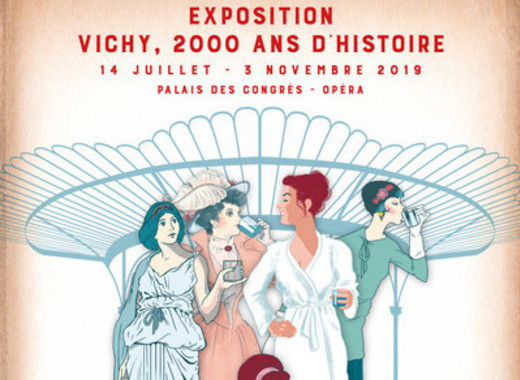 Vichy, regarded as the queen of spa towns, organises for the first time a massive exhibition to showcase its two millenniums long history. For four months between 14th July and 3rd November 2019 at the Palace of Congrès-Opéra the French city will be hosting an exceptional exposition encompassing more than 1500 square metres in support of its bid for becoming part of the UNESCO world heritage list.

To know and understand the past, apprehend the present and imagine the future of Vichy: this is the ambitious objective of the exhibition titled Il Était une fois la reine des villes d’eaux, translated as Once upon a time there was the queen of spa towns. Compiled from the collections of the City of Vichy, Compagnie de Vichy and other regional institutions or national and private collections, the contents of the exhibition are very diverse with more than 550 elements, including works of art, archaeology discoveries, old objects, reconstructions (in drawing or 3D), manuscripts, models, plans, photos, movies etc. They testify to the reality of hydrotherapy in Vichy, but especially the scope and major impact of this ages-old practice on the development of the city and its territory.

Earlier this year Vichy together with ten other thermal cities have submitted a joint transnational application under the name “Great Spas of Europe”. It aims to underline and recognise the characteristic heritage value and the common identity intrinsically linked to the cultural and social practices of water rituals, typical of Western Europe. Submitted by Bad Ems, Baden-Baden and Bad Kissingen in Germany, Bath in England, Baden bei Wien in Austria, Spa in Belgium, Vichy in France, Montecatini Terme in Italy and Karlovy Vary, Frantiskovy Lasne and Marianské Lazne in Czechia, the application is expected to be evaluated in the middle of 2020. Hence, the French spa capital decided to dedicate the current year to promotional activities with a programme consisting of more than fifty events.

For more information on the exhibition follow this link.