We talk to the mayor of Vidin Municipality Dr. Tsvetan Tsenkov about its problems, potential, hidden treasures and projects that will transform it 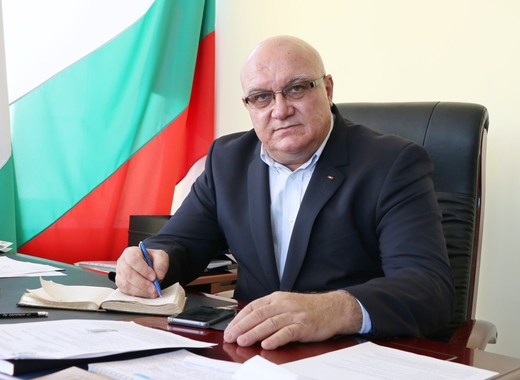 Dr. Tsvetan Tsenkov was born on April 27, 1962 in Vidin. He graduated from the Medical Academy - Sofia and worked as a cardiologist in Bankya and Vidin, after which he went to Libya as a consultant at the central hospital. He founded and successfully managed the Biomed 99 Medical Center for 20 years now. He was a member of the 39th National Assembly on the NMSS list. In 2005 he became a member of the Management and Supervisory Board of the NHIF. He was Deputy Mayor of Vidin Municipality (2011-2015).

Dr. Tsenkov, congratulations for your first term as mayor of Vidin! You were deputy mayor of the municipality and its problems are familiar to you. What is your diagnosis and what remedies will you prescribe for their treatment?

After my three-month stay in Vidin Municipality, I can say that we have significant uncovered liabilities, as well as sanctions imposed by the ‘Audit of EU Funds' Executive Agency. To be honest, the municipality was viewed as a honey pot, but in the end, all this appetite comes at the expense of that same municipality.

The most important thing for us is to adopt the budget and the new structure of the municipality at the next session of the municipal council. We will create a powerful center for budgeting, finance and economic development, which has been missing for the last ten years.

If the city council decides, we will set up municipal businesses like our neighboring city of Montana. The idea is for Vidin to return to the "national championship" league and that will be deserved, because we have huge resources. I can also say that the municipality is rich but does not collect its dividends.

In what directions will Vidin Municipality develop?

I just had a meeting with a big company in Sofia that deals with LED lighting, video surveillance, integrated information systems, and other Smart City technology. I am reaching out to them because I think that through your smartphone you can see what is happening in Vidin, what sights and events are on offer, so that you can decide to come with your family on weekends and spend some money here.

You can visit, for example, two emblematic monuments of Bulgarian military glory: the Bdintsi-Victorious Storm monument and the Sorrowful Warrior monument, dedicated to soldiers that had saved Bulgaria from annexation by Serbia.

You can see the graves of two emblematic historical figures: the first Bulgarian Exarch Antim I and Osman Pazvantoglu (the most important ruler of the Vidin region during the Ottoman rule before Midhat Pasha - ed.)

You can tour three temples of three different religions - Judaism, Orthodoxy and Islam as well as the only castle on the Danube in Bulgaria.

Aerial view of the Danube with Baba Vida Fortress. Photo by Vidin Municipality

There are many things we can offer. Few know that more than 100,000 cruise ship tourists disembark in Vidin each year. Imagine how much money can go into the Treasury, but it has to be done through a modern tourist product and a caring attitude to our history and culture.

So one of the highlights for us is tourism development and the other is a radical improvement in transport infrastructure. You know that the Ministry of Regional Development and Public Works proposed that Vidin and Pleven municipalities be the engines of growth in Northwest Bulgaria in the 2021-2027 programming period. And 6 percent of all funds under the new operational program will go to the Northwest.

Moreover, Vidin is located on the two major corridors # 4 and # 7 and is emerging as one of the future intermodal and interconnector centers in the Balkans.

The Vidin-Botevgrad highway is already under construction, the Botevgrad-Mezdra section is being made, land alienation procedures are underway on the territory of Vidin Municipality and the route from Vidin to Dimovo, Byala and Ruzhintsi is being marked. By 2023 the highway will be a fact!

We reached an agreement with the mayors of Vratsa and Montana to attract the attention of the Agency for road infrastructure for a tunnel under the Petrohan Pass to be built. When we tunnel through Shipka and Petrohan, Bulgaria will see a new day!

But besides roads, businesses are also needed. The completion of the Danube Bridge-2 gave rise to high hopes for economic recovery in the region, which did not materialize.

Traffic is a prerequisite for creating conditions for economic development, but it is not the main one. Now, the pipe (of the Balkan Stream gas pipeline) will pass 25 kilometers from Vidin. And I hope that in the next two years the economic situation will improve significantly.

Vidin has a huge workforce potential because over 25,000 families have sought a living abroad and would return if conditions change here. I had a meeting with investors in Sofia and I told them: As long as you give my fellow citizens BGN 500 salary instead of EUR 500, you will have no workforce!

Everywhere - in Vratsa, Montana, Pleven, preconditions are being created, new enterprises are coming, and Vidin remains the only vacant place. But at the heart of it all is road infrastructure. And it was in a catastrophic state and extremely overloaded - can you imagine 3000 articulated trucks dashing around the clock, causing crashes, damage to houses and deaths.

Apart from the Baba Vida Fortress, Vidin is also famous for its magnificent but crumbling synagogue. After the Organization of Jews in Bulgaria "Shalom" donated the building to the Municipality for free, you aim to restore it to become a cultural center and focus of an entire tourist area. Is this project moving forward?

Now we are clearing the last things, we want coordination with the Public Procurement Agency so that we can prevent any attacks and claims in the future. For Vidin and for me as mayor it is very important for people to know that the restoration of the temple and its transformation into Jules Pascin Cultural Center is not of national but international significance! Many tourists who come off the ships arrive to see specifically the Synagogue even in its present form. It is unique in that its architecture mimics the dome of the Baba Vida Fortress.

Connected in an ensemble, Baba Vida, the Synagogue and the Patriarchal Church will become an extremely enjoyable space. Moreover, this year we will apply for a project to shape the whole garden area along the Danube, becoming one of the top gardens not only of Bulgaria but also of Europe.

What other programs is the Municipality of Vidin currently implementing?

More than 13 blocks of flats will be rehabilitated under the National program (for the energy efficiency of multi-family residential buildings). We want to make the Youth Center an attractive place for various events. We are continuing our work on the pedestrian area.

And last but not least - we are building nearly 40 social housing units on the site of a collapsing kindergarten. I dream of turning Vidin into a smart city of the future, in which there will be electronic formats that allow people to easily park and monitor the air pollution in real time.

Do you partner with other Danube cities?

Of course, there are prerequisites for this from the past. Vidin is twinned with several German cities. We are partnering with Romania on the EU Strategy for the Danube Region and the Cross-border Cooperation Program. I am waiting for a meeting with the mayors of Zaječar and Negotin in Serbia, who also want to cooperate. This will not happen without the assistance of the National Association of Municipalities. We have many opportunities, and besides, we are a truly unique place as a city and a municipality.

What is your favorite place in this unique place?

The embankment, of course. That is where the hymn of Bulgaria begins: "Proud Stara Planina, blue Danube by its side ..." If you are on the dike in clear weather, somewhere between "Baba Vida" and the velodrome, you can see the Danube River virtually flowing into the Stara Planina mountain!

Does Vidin have its well-kept secrets that are not to be found on travel books?

It has. For example, just below the tiles on the square leading to Stamboli Kapia, there lies a whole preserved stone bridge that was buried after the great floods of 1942 and the malaria outbreak. I have the exotic idea of ​​restoring it after we have got all possible permits, lighting it and installing a glass roof for people to pass over it. Such things should not be hidden.