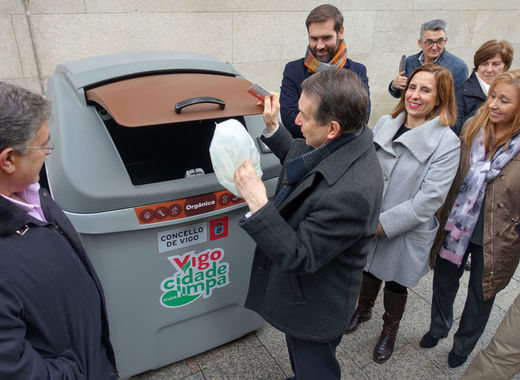 Vigo has launched a pilot project with brown lid containers in Coia and Navia, reported the local authority. If successful, it will enable turning organic waste into a natural fertilizer, to be used in agriculture.

The mayor of Vigo unveiled on Monday the new organic waste containers which will be installed in Coia and Navia neighbourhoods as a pilot. They will be used with 100% recyclable bags and the containers will open with the PassVigo card only. "The use of the new brown container is voluntary and that is why it is used with PassVigo. Shorty, the European Union will oblige us and we are already moving forward," he said during the event, quoted by the municipal website.

The containers are intended to deposit those debris that occur in the preparation of raw or cooked meals and any leftovers such as eggshells, peels of potatoes and fruits, coffee blisters, infusions, etc. The aim is to give a second life to this type of waste, obtaining a quality natural fertilizer that can be used for both agriculture and gardening.

One of the main new features of these containers is that in order to open them you will have to use the PassVigo Card and to deposit the waste. These containers will be installed in addition to the existing ones in the city for the separate collection of paper and cardboard (blue), glass (green), plastics, bricks and cans (yellow), disused batteries, domestic used oil, clothes, footwear and accessories.

In recent years, Vigo has become the Galician city with the most awards for cleaning its streets and appears in all clean city rankings from Spain, boasts the municipality. Vigo is also the top recycling city in Galicia autonomous community.

The main environmental threat from biowaste is the production of methane, a strong greenhouse gas, emitted by the decomposition in landfills. The EU therefore aims to mitigate this problem through the Landfill Directive (1999/31/EC) which obliges EU Member States to reduce the amount of biodegradable municipal waste that they landfill to 35% of 1995 levels.