Vilnius 2020: Christmas with a difference

Due to the pandemic, it will be less exuberant, but brighter, more intimate, and rich in alternative ideas 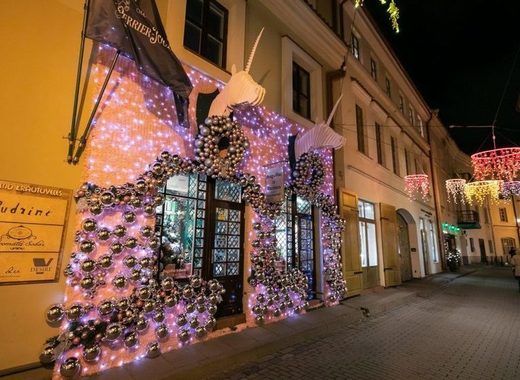 The second wave of the coronavirus has prompted most European cities to cancel their mass Christmas festivities such as fairs, carnivals, marches, tree-lighting events... This year, the Lithuanian capital will make no exception to this transitory rule.

However, according to the City Council, Vilnius residents have shown during the first wave that they can come together in difficult times and unleash their creativity. So, despite the partial lockdown, Christmas 2020 in Vilnius promises to be less exuberant, but brighter, more intimate, and rich in alternative ideas.

To ensure the safety and health of Vilnius residents, events that used to attract thousands, including  the Christmas 3D fairy tale, the Christmas train, the Christmas campuses, the International Christmas Charity Fair, and the Christmas Design Square, had to be shelved. They will be replaced by festive walks around beautifully decorated Vilnius locations and alternative ideas put forward by local artists with active community involvement. The city will allocate a total of about EUR 280 000 so that Christmas 2020 in Vilnius may be met in style.

There will be more festive decorations all over the city - not only in the Old Town and the city centre, where impressive spruce trees will be installed next to the Cathedral and Town Hall, but also in the neighbourhoods, closer to home. Fir trees will be glowing in most communities, houses and shop windows will be transformed by ingenious lights, making walking around both safe and fun after dark.

This year, for the first time, Vilnius City Municipality announced a competition for street decoration professionals, whose projects were voted on by the public online. Vilnius residents and the professional jury chose UAB Adam Decolight to implement most of the festive lighting work around the city with a three-year contract.

Lighting of Cathedral Square spruce will be broadcast live on TV

Vilnius will announce the start of the winter holiday season on 28 November, during a TV3 broadcast, when the main Lithuanian spruce will be lit in the Cathedral Square. Traditionally, what the tree decoration will be like will not be known until the solemn moment which everyone can experience on the TV screen, in the safe comfort of home. And on 5 December the second spruce in the Town Hall Square will come aglow. Afterwards, it will be possible to walk around the city without congregating and safely admire the green splendour until 7 January.