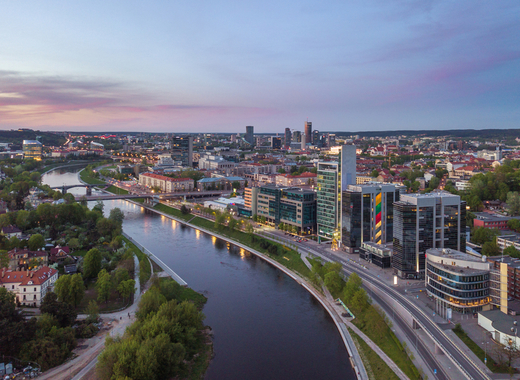 Vilnius is emerging as the biggest tech sandbox in the world, estimate the local authorities. At a strategic geographical position, Vilnius has always been a cosmopolitan city with important trade that attracted a melting pot of cultures, languages and religions. Nowadays, the city is positioning itself as a cluster of technology start-ups that has seen it already rise to become one of the most important Fintech locations on the Old continent. One of the main success factors has been the creation of sandbox environments that stimulate businesses to test their products under controlled settings and with support of regulators. As a result, the Lithuanian capital now has five official sandboxes where this occurs, three in the sphere of Fintech, one in the energy and a PropTech sandbox.

The latter - Realbox, was launched last year by PropTech Baltic, and is the first sandbox of its kind worldwide. Realbox counts extends to 2.5 million square metres of property distributed across more than 100 commercial, residential and multi-purpose buildings, including the four biggest shopping malls in the country and several public spaces. The sandbox is designed to help PropTechs in early stages that need to test their concept or run pilot tests. It is suitable for all PropTech types. With Realbox, Vilnius hopes to replicate the success of the Fintech sandbox and build on the already thriving tech start-up ecosystem.

According to Remigijus Šimašius, Mayor of Vilnius: “Vilnius is a forward-thinking place. Public and private actors are constantly working together to create better conditions for individuals and businesses to thrive here, investing in the tools and technologies of the future that will help us solve real life problems, for citizens of Vilnius but also beyond. The fact we have become a Fintech hub reflects that. With Realbox, we are already seeing the PropTech scene beginning to flourish. We will continue to promote open data and other intelligent city policies, and we have made the municipality’s buildings available to Realbox”.

Justina Juršytė, RealBox lead and Co-Founder of PropTech Baltic, claims: “With the sandbox, we are taking an additional step in facilitating support and space for any PropTech company to test their ideas, their technology, and even showcase their products in front of potential international clients.”

The growth of Vilnius as a Fintech hub considering the number of Fintechs has more than doubled in the last two years and is second only to the UK in numbers of Electronic Money Institutions (EMIs). Among the Fintechs established here is Alphabet’s Google Payment, which recently obtained an e-money license, allowing it to electronically store and transfer the funds of its customers. TransferGo, an online money transfer company with a serious impact in the global remittances industry and currently onboarding an average of about a thousand customers daily, was founded in Vilnius.

The creation of the PropTech sandbox aims to replicate the successes of the Fintech sandbox and capitalise on the thriving ecosystems and talent pool available in Vilnius. After only one year, there have already been several success stories. For instance, Serfy, a company that allows more efficient management and maintenance of buildings thanks to a ticketing system, transitioned quickly from sandbox to receiving seed funding and closing various deals by showcasing through the sandbox. The authorities of Vilnius are committed to keep improving conditions for the future. Vilnius has joined the race to be among the first cities to roll out 5G, the technology that will allow ‘the Internet of Things’, the ability for devices, cars and buildings to be able to speak to each other.