The second edition of the event will be held January 24-26, featuring 30 light installations by mostly Lithuanian artists 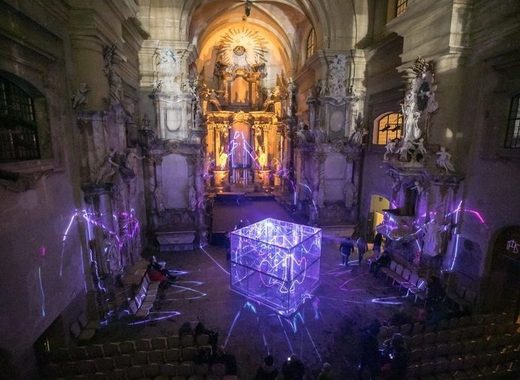 The darkest time of the year in Lithuania will look much brighter to residents and guests of its capital from January 24 to January 26, 2020. Over the three nights of that period, 30 light installations will be illuminating courtyards of Vilnius Old Town – from the Arts Printing House to the courtyard of the Palace of the Grand Dukes of Lithuania.

The gorgeous displays will be part of the Vilnius Festival of Lights, which will be held for the second time following the huge success of its first edition, Vilnius Municipality has announced. Most of the installations will be created by Lithuanians, as local artists will be the focus of the upcoming Festival.

In the footsteps of Lithuania’s founding father

“We will continue the mission of Gediminas started 697 years ago – he invited guests to the capital in his letters, while we will invite them using lights. The festival has several missions. The main one, of course, is to create a celebration for residents and guests of Vilnius on the occasion of the birthday of the city and to show the city’s architecture from new perspectives. But we also want the Festival to become a space for growth of Lithuanian light artists, a testing ground and a springboard to the international space”, said Remigijus Šimašius, Mayor of Vilnius, quoted by the municipality press centre.

Gediminas, Lithuania’s founding father, was born and died in Vilnius. During his reign as Grand Duke of Lithuania (1315 – 1341) he managed to expand its territory which stretched from the Baltic Sea to the Black Sea.

According to the event organizers, there will be many unexpected installations this year, and some will include the symbols of Vilnius in their design. The previous festival, for example, showcased the illuminated sword of the Gediminas monument.

The Festival of Lights of Vilnius is one of the highlights of the Vilnius birthday celebrations in the run-up to the 700th anniversary of the capital city, which will be marked in 2023.

As many as 130 000 people visited the first edition of the Festival last year, enjoining 26 light installations created by artists from 8 countries.