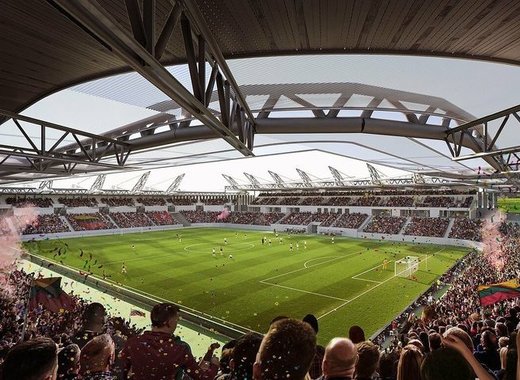 A court has allowed Vilnius Municipality to sign a contract to build and operate a long-awaited national stadium in the Lithuanian capital, reported BNS. Vilnius Regional Court on Monday declared null and void a previous Public Procurement Office's (PPO) order for the city to terminate the process, saying claims that the project did not meet the criteria for a concession were unfounded. PPO mulls appealing the decision.

Following several years of tendering procedures, both the City Council and the central government gave the go-ahead to signing a concession agreement with Axis industries, winner of the bid to build the stadium and BaltCap, the financial investor. Last March, however, the PPO ordered the city to suspend the signing of the agreement at the request of the Financial Crime Investigation Service and the Prosecutor General's Office which had their doubts about the increased value of the concession contract.

As TheMayor.EU has already informed, the state-of-the-art sports complex comprises a UEFA-standard football stadium with 15 000 seats, an athletics stadium, a sports facility with gymnastics, handball, volleyball, boxing and basketball courts, a community and cultural education centre with a library, a kindergarten, and a sports museum. The complex was jointly designed by British architect Damon Lavelle of global firm Populous and Lithuania's Cloud Architektai studio. After completion, planned for 2023, it was to be operated by Kauno Arena.

The construction of the stadium and the adjacent facilities was estimated to cost around EUR 93.2 million. But, since Vilnius' authorities decided to use the option of spreading out the payments over 25 years, the cost ballooned to almost EUR 156 million. The funding scheme would be shared by Vilnius City Municipality (101.5 million euro) and the central government (54.5 million euro).

The planned new national stadium in Vilnius has a long and devious history. Conceived way back in 1987, when Lithuania was still a republic of the Soviet Union, as a replacement of three smaller stadiums, the project was put on hold in 2010 and resumed in early 2016 only to be dumped shortly afterwards. In September 2016 a new competition for the construction of the stadium was announced.

Now, Vilnius City Municipality plans to finally sign the concession agreement by the end of this year, provided that legal challenges will not put another spoke in the project’s wheel.