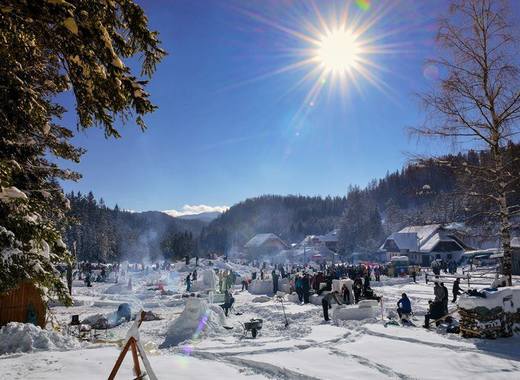 As every year from 1993 also this year is organized event called Gradovi kralja Matjaža or the Castles of King Matjaž. The Snow Sculpture Festival is considered the main winter tourist event in the Carinthia region. The three day event will take place in the town of Črna na Koroškem. The lively cultural and sports programme which will accompanied the event is entirely connected to the legend of King Matjaž.

The central event of the Snow castles of king Matjaž is the competition of teams in building snow castles. The building teams come from all over Slovenia and abroad. The construction of snow figures begins in the morning and lasts the whole Saturday. At 6:00 p.m., the results are announced and an awarding ceremony is held. The Sunday part of the Festival programme will be entirely devoted to children - puppet shows, the hunt for the hidden treasure, building and painting of snow sculptures, possibilities of riding and many others.