Volunteers plant the longest façade garden in the Netherlands

The green record was broken in Rotterdam last Saturday 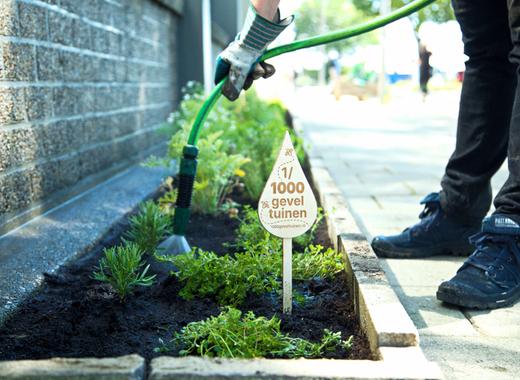 On Saturday, June 20, a group of 40 volunteers jointly planted the longest facade garden in the entire Netherlands. The record-breaking garden in Rotterdam is 142 meters long and is expected to contribute to the city’s resilience to climate change by improving biodiversity, cooling down buildings and collecting rainwater, among others.

Greening Rotterdam by the summer

The longest façade garden can be seen at De Kroon in the west of Rotterdam. It has been filled with sustainably grown plants largely selected to feed bees and support local biodiversity, explain the organisers of the initiative.

What is more, a significant part of the garden has been filled with edible plants, mostly herbs, which can be used by the people working in the building. In this way, the new facade garden improves the living environment in various ways.

The label “longest façade garden” somehow speaks for itself, as there have been more of the kind in the city. Last week’s action is just one of many planting efforts, part of the campaign 1000 geveltuinen Rotterdam (1000 facade gardens Rotterdam) initiative.

The longest façade initiative aims to make the city greener this summer by creating and initiating 1000 new facade gardens in Rotterdam alone. Facade gardens are believed to connect neighbours, contribute to the biodiversity, preserve water purity by collecting rainwater and serve as a cool place for a rest in the hot summer days.

The initiative belongs to creative Agency Groenemorgen which boasts 162 green facades so far. The goal of one thousand should be reached before September 30, so everyone living in Rotterdam can contribute to reaching this goal.

There are three ways to do this: to plant it yourself, for which purpose Groenemorgen has prepared a step-by-step guide; call for help and pay for a team to do the job for you or even better – win one. Together with the local authorities, the agency provides 25 free façade gardens every month. What you need to do is participate, win and give a little love to the garden each week.