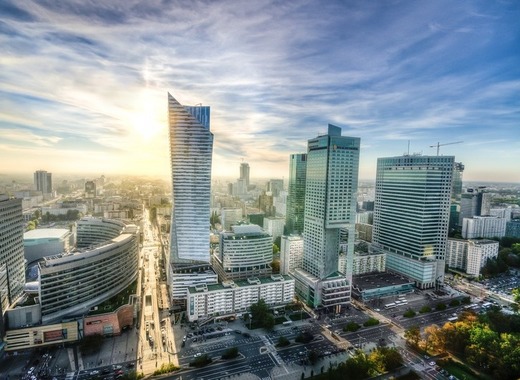 In the last 20 years, the city of Warsaw has transformed into a vibrant city looking back not only on a rich cultural history but also on a set of climate actions aiming to improve environmental quality in the city. The city now shared its experiences, strategies and approaches towards urban regeneration and climate action with an international delegation of city peers participating in the Urban-LEDS II project study trip.

The trip with city delegates from Brazil, India, Indonesia, South Africa, Bangladesh, Colombia, Lao PDR, Europe and Rwanda was organised by the ICLEI – Local Governments for Sustainability European Secretariat and UN-HABITAT to support the exchange of inspiring low-emission development approaches and examples in cities from across the globe within the project.

The main focus of the trip was the presentation of the city’s low-carbon and climate strategies and actions to meet the city’s sustainability ambitions. As a signatory of the Covenant of Mayors for Climate and Energy since 2009 the city has designed a Low Carbon Economy Action Plan with specific targets for energy efficiency, the share of renewable energy sources, and reduced air pollution levels to promote the quality of life and economic competitiveness. According to Marta Kesik, from the City Infrastructure Department, the Plan includes an investment of approximately €3.76 billion in key sectors such as transport, buildings and district energy networks from 2015- 2020.

Only few days after the Urban-LEDS visit, on 4 July 2019, the city of Warsaw finalized and approved its Climate Change Adaptation Strategy. The strategy had been developed in a three-year participatory process involving the citizens of Warsaw. With climate modelling techniques the city representatives co-authoring the strategy had defined the pre-condition of an expected average annual temperature increase of about 0.5°C every year for 25 years (resulting in an expected 10 to 12°C increase by 2100). In this sense, Warsaw’s Adaptation Strategy comprises adaptive measures designed to reduce the negative impact of hot weather periods, the urban heat island effect and preventing an increase of heat related mortality rates and damage caused by strong winds. In order to protect the city’s nature system from the consequences of drought and local flooding, Warsaw is also aiming to opt for different nature-based solutions (NBS) on its territory. Amongst others, citizens are called to participate in the greening of the city vial mobile apps like #Milion drzew (Million trees) to identify places for trees to be planted.

During the exchange, Marta Bugaj responsible for the development of the city strategy, particularly highlighted the adaptive measures as a means for the city to eliminate damage related to the variability of water flows of the Vistula River, to reduce the climate risk caused by heavy rains and to prevent damage to technical infrastructure as a result of extreme weather conditions.

To demonstrate the strategy in practice, participants in the trip were invited to a walking tour alongside the Vistula River Boulevards, one of the city’s biggest urban regeneration projects. In 2013 a plan to modernize the boulevards was put into place. The first newly regenerated area was opened up in 2015, followed by further extensions in summer 2017. The rehabilitation also included an intense environmental restoration process of the Vistula River, setting up free recreational spaces for citizens in the future. In order to cope with the effects of climate change, the riverbank has been adapted to support flooding episodes with the construction of infrastructure supporting rising water levels during raining seasons. Future expansion plans of the Vistula Boulevards will include an extensive renovation to create additional space for public interaction.

The visit was concluded by a guided tour to the Czajka Wastewater Treatment Plant one of the largest and most modern wastewater treatment plants in Poland. The plant is treating sewage from Warsaw and its neighbouring municipalities. Treated wastewater is discharged to the Vistula River and waste from the process is disposed of in the sludge incineration plant, generating energy for self-consumption in the internal plant processes. Participants had the opportunity to learn about the treatment processes and to explore the concepts of waste-to-energy and the water-energy nexus; which is becoming more and more popular in cities across the world. The total investment of €7690 m ($1bn approximately) in the project was co-funded by European Union Cohesion Fund with 40% and the Municipality of Warsaw with 60%.

Urban-LEDS II city representatives and authorities actively interacted with their counterparts from Warsaw and explored common challenges driving urban climate action processes. Warsaw’s urban and green space projects, low-carbon strategies and its recent climate adaptation Plan will shape the future exchange of knowledge among the cities within the project.