“Mobility remains an important pillar, we need to balance accessibility and livability within a historical context.” 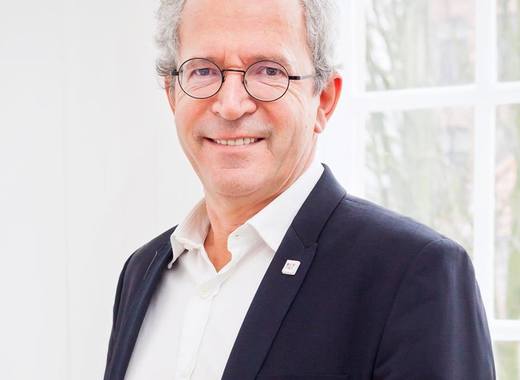 Renaat Landuyt was elected to the Belgian House of Representatives in 1991, where he served until 1999. From 1995 to 1999 he served as a quaestor of the House. He served as secretary of the parliamentary investigation into the Dutroux Affair. After the 1999 general elections Landuyt became Flemish minister of Labour and Tourism. In 2003 he become Deputy Minister-President of Labour and Tourism. After the regional elections of 2004, Landuyt left the Flemish government to become Minister of Transport in the federal government (2004–2007). He was elected again to the Belgian Parliament in June 2007 and after the establishment of the Leterme I Government took up his seat, in 2010 he was re-elected. He became mayor of Bruges in 2013.

Bruges is one of the most-well preserved medieval towns in Europe and the historic city center is a prominent World Heritage Site of UNESCO. How do you promote and preserve the cultural heritage of the city?

The fact that Bruges is such a well-preserved medieval city is largely thanks to the city’s own efforts. For almost 150 years, the municipality awards grants (between 300 000 - 400 000 € each year) for the restoration of unprotected immovable heritage. During the 70’s and 80’s, Bruges was one of the first European cities which embraced the notion of urban regeneration. The canals were cleaned up, slowly but surely traffic started being banned from the streets and public squares were tidied up. All of these efforts led to the entire city center being declared as a World Heritage Site by UNESCO in 2000.

Our cultural heritage consists not only of monuments, but also of traditions and stories (immaterial heritage) and collections (movable material heritage) which are kept safe in our archives, libraries and museums. In 2017 we invested in a depot for the objects of our Musea. In this depot, our movable heritage will be stored in a safe and adequate way. At this moment, our Musea house 70 000 objects. We even have our own restoration workshop, which specializes in 15th and 16th-century paintings.

The oral and intangible heritage of Bruges is captured and recorded in two valuable initiatives. For visual images, there is a photo database (Beeldbank Brugge) on the worldwide web that collects and archives photographs about historic Bruges. For the written and spoken word, ‘Bruges tells its story’ (Brugge Vertelt) is a website where local people can tell their own stories about folklore, great sporting events, family history or recent community events.

We promote Bruges as a valuable World Heritage Site. While doing so, we always take into consideration the quality of life of our inhabitants. Bruges needs to be a pleasant city to visit and to live in. We welcome all visitors, but in our touristic campaigns we focus on the long-term visitors who bypass the typical tourist attractions. For example, in Milan a tram promoting our Triennial for Contemporary Art and Architecture is riding the streets.

Many other efforts are made to promote our cultural heritage to citizens and visitors. For example, each year the public is invited to Open Monuments Day. This way, people can discover hidden gems and learn more about our most famous monuments. On top of that, most of our cultural heritage can be found in digital form. Via the websites erfgoedbrugge.be and kaartenhuisbrugge.be people all around the world can explore our rich cultural heritage.

Tell more about your initiative for the free shuttle buses and its aim to be the mobility of the future.

Since 5th May, light and compact shuttlebuses are riding in a loop around the historic center. People can ride these buses for free and they can hop on and off at different stops. One of the reasons we started this service, is to ban large and polluting buses from the small streets in the city center. In doing so, the air quality in the city improves and there is less damage to our cobblestones. We also want to encourage people to park their cars in one of the public parkings outside of the center. Parking space is already very limited in our historic center. We want to create as much parking space as possible for the people living in the center. It’s also important to cater to the needs of the less mobile people in our society. Thanks to the shuttlebuses, they can go around town in a safe way. We don’t want any more large buses in the center. For now, the buses ride in the weekends on Saturdays and on the first Sunday of each month. In the future, we want to expand by providing a shuttle service to and from the public parking lots outside of the center.

Bruges is a leader municipality in air quality. How do you achieve these excellent results?

The City of Bruges has been measuring the air quality intensely since 2006. Between 2006 and now, the amount of particulate matter in the air has dropped with 39 percent and in some places even with 63 percent.  A large part of the particulate matter in our air comes from abroad, but locally, traffic and the heating of buildings also plays a big part in the pollution of our air. In order to improve the quality of our air, the city took many measures these past years. Buses got soot filters, travel buses were banned in the center and hybrid and electrical buses were introduced.

Another spearhead of local policy is the wish to turn Bruges into a cycling city. We invest a lot in our biking policy and infrastructure in order to stimulate people to travel by bike instead of by car. Wherever possible, safe bike lanes are established and we try to separate cyclists and pedestrians from motor traffic at dangerous crossroads. A recent example of this is a new tunnel for cyclists and pedestrians near our railway station. Moreover, there is sheltered bike storage throughout the city, like the one under railway station with 4,500 places. In addition, temporary storage is available when major events take place. All of our efforts have earned us the title of best Cycling City in Flanders. We keep measuring the air quality via our own city laboratory in order to make further improvements and guarantee a good air quality for locals and visitors.

At the beginning of this legislature, the City of Bruges established a climate plan. We want to reduce CO2-emissions with 20% by the year 2020 and we aim to be climate neutral by 2050. By promoting sustainable energy and offering free advice, we want to encourage our inhabitants to make environmentally friendly choices. A free energy scan device to control air quality is offered to all local inhabitants. It details how to reduce the loss of energy in private houses and provides a concrete action plan for improvements.

On a regular basis, initiatives are launched relating to important issues that affect the daily lives of each and every citizen. Each year during spring, the ‘Brugge Oltied Schoane’ (Bruges Always Clean) - campaign encourages citizens to keep the neighborhood clean and tidy by picking up litter and removing weeds from the streets. Fortunately, local people already collect and separate more than 71% of their waste, but there is still room for further improvement.

One of the most important contributions in the field of environmental protection has been the reduction and complete stop of pesticide and herbicide use. European Union regulations obliged all cities to reduce their use of these chemicals to zero by the end of 2014. Bruges has successfully achieved this goal. For the past years, we have been controlling weed growth with machines that use steam, fire or brushes.

Apart from our own budget, we rely on European subsidization for our urban projects. We link local projects to European policy objectives and receive subsidies for this. But that is not the main reason why we do this: by working with European projects across national boundaries we broaden our horizon, we gain knowledge and expertise, and raise our level of innovation.

What do you think about a unified platform for European municipalities and its main goal to make and keep European citizens better informed about what is taking place in the European Union? How the portal can be useful to the small municipality as Bruges?

Many citizens are not aware of the impact of Europe on a local level. For them, the EU is an abstract concept. A good flow of information is very important to make them more aware. It is good to see the impact of Europe in a city, but it is also important to educate citizens about the positive impact of European regulations and policies and of the local measures taken to meet those regulations. Exchange of inspiring examples via a digital platform is an absolute added value. It also shows that every city has certain challenges and questions and it ensures that we can learn from each other at every level, it brings innovation to the whole city. Not only cities, officials and politicians can learn from each other in this way, citizens and citizens groups can also be inspired to make their city a better place.

Bruges is an excellent city for students, locals, employees, visitors… it is a city which attracts both young and older people. We want to continue with our activities which support our Climate Plan. We signed the Covenant of Mayors, which set high demands concerning energy efficiency and climate neutrality for our city. We want to strengthen our status of world heritage city and at the same time focus on our future. Mobility remains an important pillar, we need to balance accessibility and livability within a historical context. We will bring our port and city even closer together so both can be mutually reinforced.