When in Barcelona, see this

You might know Sagrada Familia like the back of your hand, but have you seen these places in Barcelona? 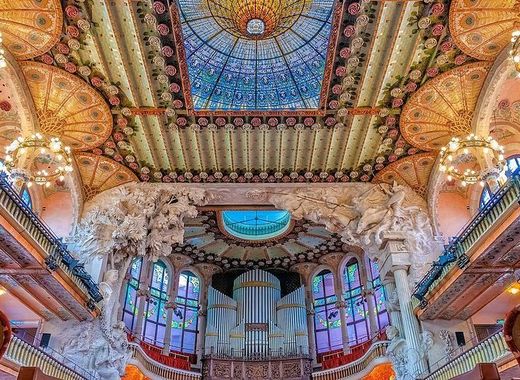 Barcelona is a year-round tourist destination, and you wont be bored even if you visit it on a non-working day. This is easily noticeable by the immense cultural treasure waiting to be discovered at literary every corner and small path, in the shadows of top-rated attractions like Sagrada Familia, Park Guel and Barcelona Football Club stadium. Hereby we present you with an alternative tourism path showcasing less known tourist sites in the Catalan city, which are nevertheless worth seeing.

Remodelling an existing building from 1864 by Joaquim Sitjas, the architect Llus Domnech i Montaner transformed it into a modernist piece of art, finished in 1906, under the commission of the hair of the house - Francesca Morera i Ortiz.

The history of the hospital dates back to 1401, when six hospitals were merged into the one of the Holy Cross, as was called back then. It used to be an important example of gothic architecture of Catalonia, but as the population grew, a newer and more spacious hospital had to be build and the construction took place between 1902 and 1930, designed by Llus Domnech i Montaner. The building thus combines Catalan Modernisme with North/Central European Gothic Revival elements.

Also known as the house with the dragon, this former umbrella shop was refurbished in 1883 by the architect Josep Vilaseca in a modernist style with oriental decorations. Apart from the stained-glass windows and reliefs of umbrellas, probably the most prominent element on the outside, is the Chinese dragon on the corner of the faade.

Another listing by the modernist architect Llus Domnech i Montaner is the building of the Musical Palace of Catalonia, built between 1905 and 1908. It used to be home of Orfe Catal, and reflects the contemporary life of the vibrant Barcelona population. Inscribed in the World Heritage Site of UNESCO for almost 20 years now, the building represents a unique combination of sculpture, mosaic, stained glass and ironwork.

The "Pastisseria Escrib" is a historic pastry shop in the city of Barcelona. Founded on July 25, 1906 today it is run by Christian Escrib, 4th generation of the Escrib family. After a long day of shopping and strolling around the mind-blowing tourism sites of the Catalan capital, you can surely deserve to treat yourself to a nice dessert.

Do you have an interesting story from a city, located in the European Union? Write us at office@themayor.eu