Where else celebrate St Valentine’s day, if not in Paris? 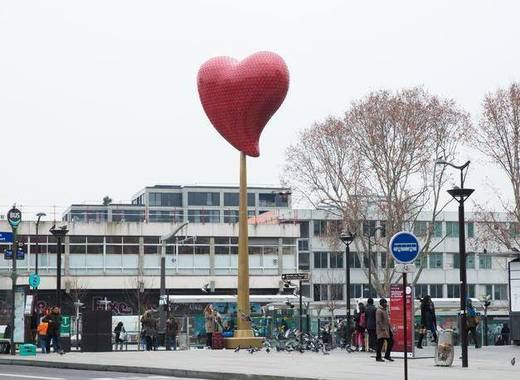 14th of February, also known as Lovers’ day, will be celebrated in Paris with inauguration of the Heart of Paris installation ("Cœur de Paris"), Porte de Clignancourt. The event is part of the official launch of the extension of Tram 3 line reaching to the port of Asnières and will be followed by a big popular ball of Love in the 18th district of the French capital.

Decorated with four thousand hand-painted tiles in the oldest craft factory in Lisbon, the flamboyant heart has rotating and luminous mechanism, where the light turns on and off at the rhythm of a heartbeat. The work is believed to reflect the identity of the area of a meeting place, convergence place and a focal point between today and tomorrow. What is more, the heart sends a message of welcoming and hospitality to the visitors of the neighbourhood. The Heart of Paris is the first artwork of Joana Vasconcelos, born in the French capital but is currently based and works in Lisbon, which is placed permanently in a public space in Paris.

On the occasion of the extension of the T3, the City of Paris renews the artistic accompaniment similarly to previous sections. This extension of the tram line from the Porte de la Chapelle to the Porte d'Asnières was inaugurated on November 24, 2018 in the presence of the Mayor of Paris, Anne Hidalgo.