Who was Robert Schuman?

Learn more about one of the Founder Fathers of Europe 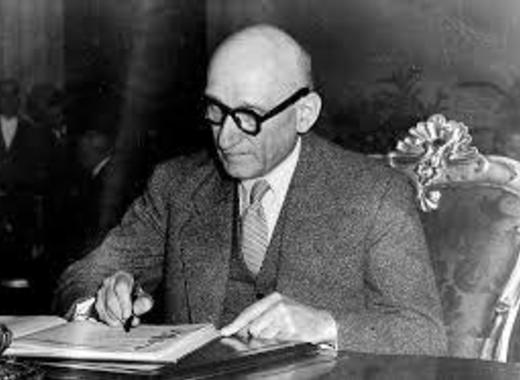 Jean-Baptiste Nicolas Robert Schuman (29 June 1886 – 4 September 1963) was a Luxembourg-born French statesman. Schuman was a Christian Democrat and an independent political thinker and activist. Twice Prime Minister of France, a reformist Minister of Finance and a Foreign Minister, he was instrumental in building post-war European and trans-Atlantic institutions and was one of the founders of the European Union, the Council of Europe and NATO. The 1964–1965 academic year at the College of Europe was named in his honour.

9th May is Europe Day. It involves all of the citizens of the EU because it celebrates the declaration delivered on 9th May 1950 by Robert Schuman. On that day 5 years after the end of the Second World War French Foreign Minister Robert Schuman made the initial appeal for the construction of Europe. This declaration announced the creation of the European Coal and Steel Community (ECSC). During the European Council in Milan in 1985 the heads of State and government decided to set 9th May as "Europe Day". Celebrated each year since 1986, Europe Day is the occasion for events and celebrations that draws Europe closer to its citizens.