Why can Tauragė be deemed the greenest district in Lithuania? 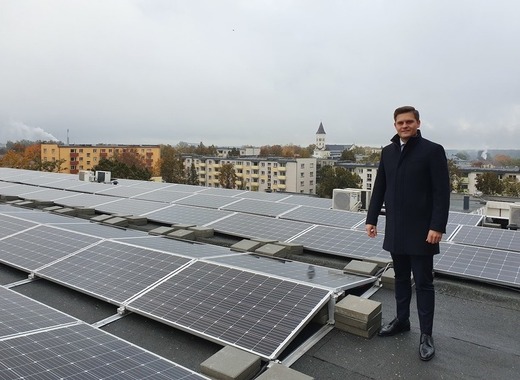 Tauragė deems itself the greenest area of Lithuania, where the energy of the sun, wind, water and even sludge is used. This district is home to the largest wind farm in the country, while the Balskai Dam is the country’s second largest hydropower plant that has sludge processing facilities. Moreover, there are solar power plants on the roofs of the public facilities in Tauragė district. Tauragė District Municipality implements various energy efficiency solutions. It has declared electricity savings, becoming a member of the ESO Intelligent Energy Club.

In 2015, the initiative to turn Tauragė into the greenest area both in Lithuania and in the Baltic region was raised by Sigitas Mičiulis, who was the elected mayor at that time. Eventually, the initiative has become one of the priority tasks of Tauragė Municipality Administration and its employees, which has been systematically implemented.

Currently, Tauragė is completing one of its most important projects aiming to modernize the city lighting. All old city luminaires are being replaced by new LED light lamps. About 3,500 city lighting lamps are to be replaced. 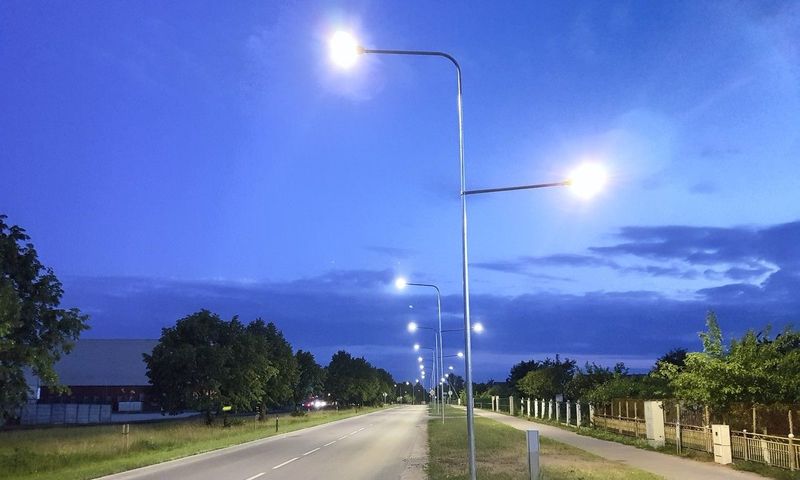 New LED lamps are being installed in Tauragė. Photo by Tauragė District Municipality

“We are sure that after the modernization of the street lighting residents will notice and appreciate that the city streets have become brighter and safer. Likewise, this will ensure a longer lifetime of the luminaires and lower costs for the city. We expect to save up to 40% to 50% for the power consumed in the city lighting,” the mayor of Tauragė district Dovydas Kaminskas assumed, estimating the benefit of the project. “The project value exceeds 1 million Euros, but the supplier will be paid in instalments from the savings for the power and the after-sales service will be provided throughout this period.”

This year the installation of solar power plants on the office buildings of Tauragė district institutions was launched, aiming to contribute to the environment protection and the use of green energy. Solar power plants have been already installed on the building of Tauragė Hospital shared with a kindergarten, as well as on the building of the municipality administration. After receiving the state budget funding, solar power plants will be installed on the roofs of another 6 institutions this year. On average, an institution is expected to produce approximately 40,000 kWh per year, or approximately 30% to 90% of its consumed power (depending on the size of the institution).

A city of electric buses

One of Tauragė's e-buses. Photo by Tauragė District Municipality

The mayor of Tauragė explains that the municipality is relying on the sustainable mobility plan, which prioritises public and environmentally friendly transport. The city with 22,000 residents is completing 5 electric vehicle charging stations. It is expected to launch the use of the first two electric passenger buses by the end of this year. Next year the bus fleet should be supplemented by another 3 similar electric buses. Such vehicles will cost the city 4 times less than those using diesel in terms of fuel consumption and operation.

Among the other energy projects that have been implemented, it is worth mentioning the sludge processing facilities constructed in 2015. As a result, the sludge is processed very efficiently. The biogas produced during the process is used for power and heat production, sludge drying and the needs of the local sewage treatment plant. In 2018, 300,000 m3 of biogas, 197,600 kWh of electric power, and approximately 1,256 million kWh of heat used for the activities of UAB Tauragės vandenys were produced. By the way, biofuel makes 99% of fuel used for the central heating in Tauragė.

Tauragė District Municipality is one of the leading municipalities in the apartment building renovation. This year alone, 10 objects have been renovated in Tauragė. The renovation of individual apartment buildings is actively moving to the quarterly renovation. According to data obtained from 50 renovated apartment buildings, their energy consumption has decreased threefold as of 2014. The residents appreciated that the modernization of buildings in residential areas contributes to both significant savings of money and improvement of the quality of life – the level of comfort is increased; the view of residential areas is changed, and the public infrastructure is improved.

Not only producing, but also decreasing energy consumption

"We have several times higher heat and power generation capacity than it is actually consumed in Tauragė district,” the mayor says. “And when preparing the District Strategic Plan for 2020-2030, we intend to build it on the Sustainable Development Goals.”

The Tauragė District Council has approved two special plans for the construction of 166 MW wind turbines. Therefore, presently one of the most ambitious goals is to attract 160 million Euros of private investment to expand the wind farm alongside Pagėgiai district, which is currently the largest wind farm in the country. There are also plans for 2020 to install even more solar power plants on the roofs of institution offices, to purchase another three electric buses, and to expand the network of electric vehicle charging stations.

“Of course, we must keep in mind that the aim is not only to produce as much renewable energy as possible, but also to reduce energy consumption,” D. Kaminskas says. “Many green energy projects are coming to a conclusion this year and the most important goal for the coming year would be to evaluate the effectiveness of these measures, such as the lifetime of the batteries in the buses and the distances they cover, how much electricity solar panels would generate, and whether residents would use electric vehicle charging stations. This will determine how we’ll continue to actively pursue new energy saving measures. We will also be actively collecting various statistics and installing smart data collection systems in the city.”

Tauragė District Municipality has set ambitious goals to change the vehicle fleet of all state institutions from the ones using internal combustion engines to electric vehicles by 2030.

“We care not only for technical solutions that save and create green energy, but also for education. Next year, in cooperation with the technological universities from Klaipėda, Kaunas and Ternopil (Ukraine), we are planning to open a STEM clean power laboratory. It will be available to high-school, college and university students for learning about the future of clean and renewable power technologies,” D. Kaminskas said, sharing the immediate plans. “We as a small municipality want to set an example that in order to make a difference, we have to start from ourselves; and if we can make it, that means the other municipalities can do it as well.”

The mayor of Tauragė notes that green energy solutions reduce environmental impact, fossil fuel combustion and pollutant emissions, conserve natural resources and reduce energy and electricity costs, while savings can be used to improve the infrastructure and service quality.