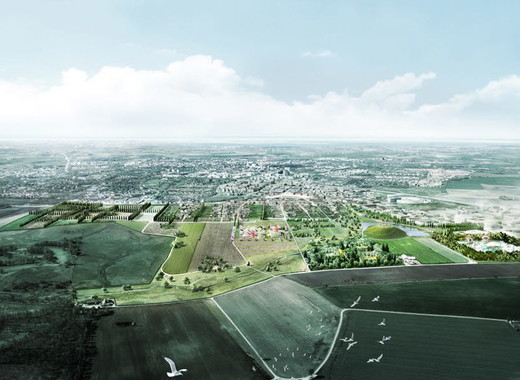 Around the highest point in the Swedish city of Lund, a stone’s throw from the international research facilities MAX IV and ESS, a new district called Brunnshög is emerging. The development is billed as one of Northern Europe’s most attractive environments for enterprise, research and education.

It is estimated that 40 000 people will live and work in this southern area of Lund and some of them have already started moving into their new homes. Swedes are known for their love of nature and, tailored to the needs of Brunnshög's residents, a splendid park is now in the making.

The Knowledge Park is one of the city's largest park initiatives in many, many years, says Karl-Oscar Seth, city gardener in Lund Municipality. It is a new type of park, where wild nature meets organized park, a bit like Stadsparken (the city park) meeting Skrylle nature reserve. By extension, the park connects to the Natura 2000 area Kungsmarken.

With a size equivalent to 30 football pitches, Knowledge Park will merge the urban environment with the open Skåne plain. The municipality hopes that it will become not only a recreational area for those who live and work in Brunnshög, but an attractive regional excursion destination as well.

As the Knowledge Park is so close, fewer people will take their car from Brunnshög in search of recreation, which is in line with Lund Municipality’s ambitious climate goals. In the park, people can experience miles of views across the open plain and actually get the opportunity to walk out into the landscape, says Fredrik Ljunghill, municipal councillor in charge of planning and construction.

The Knowledge Park's basic concept was the brainchild of Mandaworks design studio. The park's design has since been developed further by Lund Municipality along the lines of easy accessibility and functionality.

The park's diverse and beautiful terrain allows cultivation of different species of trees and other plants which will also serve as a natural shield against the wind. Water and wastewater utility company VA SYD will build a delay sewage system with open ditches and a large stormwater pond  - eye-catching and protecting the environment in equal measure.

Barslund, the contractor for the construction of the park, hopes to wrap up work in the autumn of 2023. The cost of the project, including VA Syd's expenses, is estimated at SEK 87.5 million.