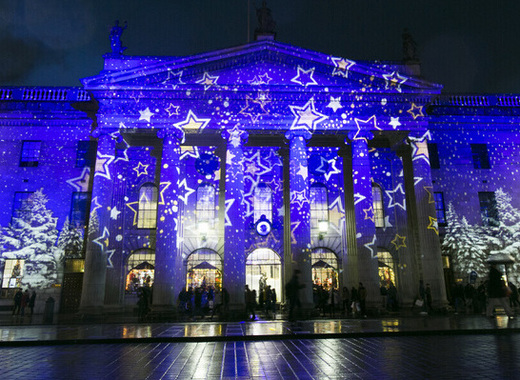 In ‘Dubliners’ James Joyce paints a grim picture of his hometown and its inhabitants, regretting years later his failure to do justice to their best qualities, notably their hospitality.

Heeding Joyce’s remorseful retrospect, Dublin City Council of today is striving to project the city as colourful and hospitable instead of bleak and reserved. One of the tools serving this purpose is the magic transformation that the Irish capital will undergo under the Council’s Winter Lights initiative for a second consecutive winter.

Every evening, from December 1 to January 1, at sunset to 2am, 14 locations around the city will be transformed with custom projections and lighting displays.

Facades of buildings will be illuminated, including City Hall, The Civic Offices, The Custom House, The GPO, The Hugh Lane Gallery, The Mansion House, Covanta Dublin Waste to Energy Plant at Poolbeg and Trinity College. Glistening seasonal lighting will be installed at O’Connell Street, Millennium Bridge, Parliament Street, and Samuel Beckett Bridge.

Two new locations have been added to this year’s lighting show, arranged under the themes of community and winter in Dublin: Christ Church Cathedral and Smithfield Square.

Describing their animation for Christ Church Cathedral, projection mapping specialists Lightscape explained that it will depict different scenes across four stages: the past, the crossroads of the present and two contrasting visions for the future, shaped by our own actions.

On New Year’s Eve Christ Church Cathedral will transform from a 2D canvas into a 3D spectacle just in time for ushering 2020 in.

Community groups and artists are involved

This year, Dublin City Council Culture Company has been working with community groups and artists across the city to help create the lighting designs for a selection of Winter Lights Dublin City sites.

The overall electrical installation comprises 157,800 low power LEDs, 100 tonnes of equipment and 15,780 metres of cable. It is hard to believe, but this dazzling display is eco-friendly. According to the local government, the lights that power some of the projections consume less than 80% of the energy of their traditional predecessors. The lights on the Samuel Beckett Bridge, for example, use less electrical power than a domestic iron, or 10 household light bulbs.

Using the occasion, Lord Mayor of Dublin Paul Mc Auliffe said: “I encourage everyone to come in to the Mansion House and then wander around the city during the month of December to experience the magical Winter Lights on our wonderful buildings including City Hall, The Customs House and the Hugh Lane Gallery. Dublin is always a special place at Christmas time and this December the city will have an added sparkle...”