Soon, the age of the rolling stock will be reduced to merely 5 years 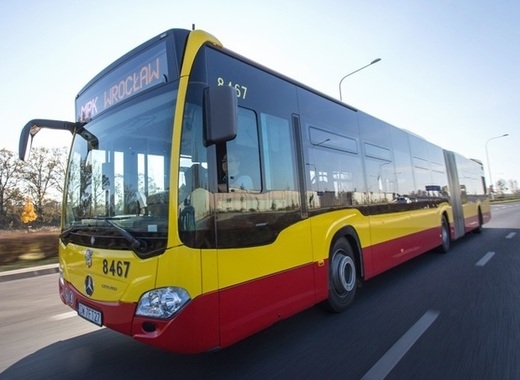 Good news for those living in Wroclaw: the Polish city announced the purchase of 60 brand new buses. They will be integrated into the public transport network this autumn and will replace the oldest models of MPK’s rolling stock.

The new Mercedes Citaro G2 line-up will be as follows: 31 short buses, solo type and 29 long, articulated buses. All of them, of course, will be air-conditioned, low-floor and will meet the strictest Euro 6 emission standards. Buses are also equipped with a passenger information system with numerous monitors inside the vehicle and USB ports for charging smartphones.

The good news was announced last week at the headquarters of Mercedes Benz Wróbel Group in the presence of the Mayor of Wroclaw Jacek Sutryk. The new acquisition for the public transport company will arrive under a contract with EvoBus Polska and Pekao Leasing, it was explained.

Upon signing the agreement, the mayor underlined that the development of public transport is his priority. “I want Wrocław’s residents to be able to move quickly, comfortably and reliably around the city, and this is another, but not the only step to this end. As we hoped, after this purchase over 80% of Wrocław buses will be equipped with air conditioning, and the average age of the fleet will decrease significantly”, he said, quoted by the municipal portal.

The municipality recalls that in 2018 MPK Wroclaw acquired 60 new buses and 50 more were delivered last year. In 2020, in addition to the newly contracted buses, another 30 vehicles of the MPK subcontractor, Mobilis, will drive along the streets of the city.

This makes it so that the average age of the rolling stock will drop to just 5 years. Moreover, the new buses are expected to be much friendlier to the environment, as they will meet restrictive EURO6 combustion standards.

Wrocław is also financing the construction of new routes, renovating and investing heavily in improving the condition of tracks, points out the municipality. Finally, MPK has also announced a tender for new trams.