The roots of Chodov go as far back as the 12th century, which ranks it among the oldest towns in the Sokolovská district. The great prosperity of Chodov can be traced back to the period when the town was the property of the Cistercian monastery in Waldsassen. This monastery played a significant role in the German colonization, which during the 12th and 13th centuries laid the foundations of the stabilized ethnic composition of the local settlement for generations to come.

In the middle of the 14th century, Chodov passed into the possession of the nobility. In the process of crushing feudal property, the Chodov estate was divided into two parts and separate localities of Dolní and Horní Chodov were created.

Together with their owners and inhabitants, they became part of the complex feudal system of the Loket castle, which lasted until the Thirty Years' War. At that time, the divided Chodov owned by the Plankenheim family was temporarily united.

The original agricultural character of Chodov has significantly changed in the process of industrialization, thanks to rich mineral deposits, especially coal and ceramic clay. Brown coal mining has been developing here since the end of the 18th century, and in 1811 the production of porcelain began. Engineering, construction and glass also contributed to the further development of the city.

The economic development of the whole area was the impetus for the transformation of Chodov into an industrial city. It was preceded in April 1869 by the administrative merger of the municipalities of Dolní and Horní Chodov.

By a decision of Emperor Franz Joseph I of September 30, 1894, Chodov was promoted to a town. Until the beginning of the 20th century, it grew into an economic centre of the industrial area between Sokolov and Karlovy Vary.

The consequences of the Second World War brought changes in the composition of the population of Chodov. In the stead of the displaced majority of German population, people of Czech, Slovak and other nationalities arrived here.

The face of the town was significantly changed by panel construction, which in the 1950s and 1960s was a quick solution to the need for flats created by the influx of labour into the newly established Chodos engineering plant and the Vřesová Fuel Combine.

This rapid growth of the city has brought about not only the conditions for its development, but also a number of problems that are gradually being solved by the democratic leadership of the city.

Chodov is a Czech town in the Sokolov District, part of the Karlovy Vary region. It has a population of 13,394 inhabitants (as of January 2019, CSO) and stretches to an area of 14.25 square kilometres. 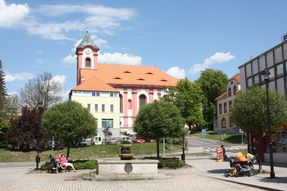 It was built in the years 1725-1733 in the High Baroque style by the builder Wolfang Braunbock. The church is single-nave and consists of three vaulted fields. The main nave is connected to a square presbytery with a rounded front wall. The fresco in the vault of its dome, from 1733, is the work of the Horlavlav painter Elias Dollhopf and depicts the Assumption of the Virgin Mary. 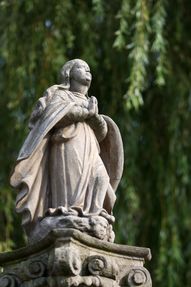 The Marian Column is located on Staroměstská Street Square. The Baroque sculpture dates back to 1675 and consists of a prismatic pedestal with a massive foot, on top of which rests a Corinthian column carrying a sculpture of the Virgin Mary. In the 1990s, the original statue was stolen and the column was damaged. It has since been replaced with a copy. 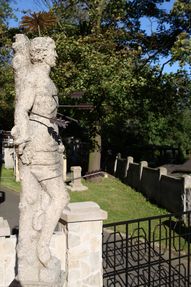 Late Baroque sculpture consisting of a granite statue of a saint tied to a tree and cut by five arrows made of gilded bronze. It is located near the church of St. Lawrence at the entrance to the cemetery.