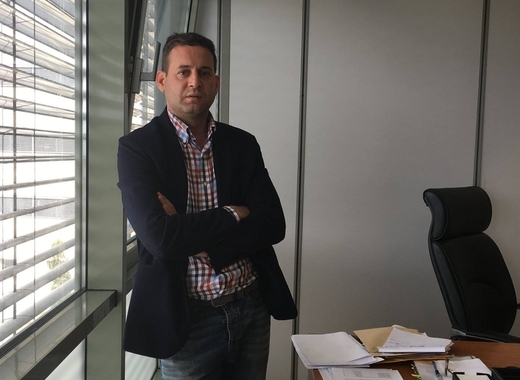 George Dimarelos is a civil and transport engineer with 20 years experience in the private sector and local governance. Between 2001 and 2010, he worked as a transport consultant and project manager in various private sector projects. Since 2010, he has served as an elected member of Thessaloniki City Council in Greece. He is Deputy Mayor for Urban Resilience and Development Programmes of Thessaloniki and Political Advisor at CIVITAS.

Thessaloniki invests heavily in the development of e-administration platforms in order to boost citizen participation and create business opportunities. Tell us more about the Digital Cities Challenge, Thessaloniki forms part of.

Although municipalities do not have major responsibilities in creating business opportunities, we think it is our duty to do our best for catalyzing development in the private sector. We have identified three areas that Thessaloniki has the potential to grow and we are inviting the industry to tell us what their perspective for growth is. These areas are 1) transport and logistics, as our port was recently privatized, 2) tourism, as we have managed to double overnight stays in the city since 2011 and finally 3) startup businesses, since the operation of 4 major academic institutions in the city generate knowledge and ideas.

Thessaloniki is an inclusive city that invests a lot in human talent. What kinds of youth participation projects are being considered?

Youth in the city is very active and creative. It is impressive what ideas and projects are out there. What we are trying to do is to show our support by providing the backing of the city with focused seminars that involve city officials and putting events under the auspices of the city. Recently, we helped an initiative of the Coca Cola Company to hire young professional for internships in big companies that are active in Thessaloniki. This our way of trying to limit the brain drain effect that is taking young professionals in other countries for better professional opportunities

From the long-overdue modernization of the airport to the prospect of a brand new metro system finally reaching completion, the City council is dedicated to the implementation of big projects that will transform Thessaloniki. What do you expect to be the impact of such fundamental infrastructure activities?

Transport oriented development in a city like Thessaloniki is helping towards building a more competitive economy. It is helping not only in minimizing travel times and congestion but is also playing a significant role in the promotion of tourism economy. Thessaloniki has done a lot in the recent years for its city branding and now is the time for capitalizing on this and invests in future growth.

The city of Thessaloniki released its Resilience Strategy on March 30, 2017. The city's action plan is based on eight city values - Social Cohesion, Local Identity and Heritage, Environmental Management, Health and Wellbeing, Youth Empowerment, Multi-stakeholder Engagement, Technology Adaptation, Economic Prosperity. Tell us more about the strategy itself and the chosen action points.

The Resilience Strategy of the city has a vision for the year 2030. Up to then there will be a number of city council elections, and administrations will come and go. The vision had to be independent from what a single mayor or administration wants. Therefore the Resilience Strategy came as a result of a participatory process in which more than 1400 institutions, NGO’s and individuals contributed their ideas and concerns. In a nutshell, under the categories you mentioned we derived methods and actions that should be implemented by 2030 in Thessaloniki, in order for the city to be resilient, mainly by identifying the shocks and stresses that occur or may occur  and get prepared as a city system to face them.

The City Council is committed to increase the energy efficiency and the use of renewable energy sources. Beyond water management and heat stress reduction, greening the city contributes to reducing air and noise pollution and increasing biodiversity. Is Thessaloniki green and resilient European city?

No we are not. But we are trying to be, and this is exactly why a resilience strategy is needed. We are continuously trying to find ways to become greener and more resilient. This is a never ending process. We set targets, we track indicators and we are focused on matching goals with funding opportunities to help us towards this direction.

Thessaloniki hosts the major seaport for southeastern Europe, linking the Mediterranean with the Balkans, Europe with Asia. Does the municipality plan to invest more in the blue economy of the city?

The recent privatization of the port is an opportunity for the city. We are cooperating with the new management of the port for the mutual benefit of both parties. We need a busy port but at the same time we need to make sure that this does not has a consequence in the quality of life of its citizens. We are participating in different networks that promote Blue Economy and we are dedicated in monitoring and intervening when action must be taken.

What is the current environmental condition of the bay? What are the measures that should be taken to improve it?

The bay is in a better condition than it used to be. There are many agencies that have their own share of authority for the condition of the bay, and we are now in the middle of a process led by the central government that has a goal to unify these authorities. We strongly support this initiative that will decrease the level of bureaucracy needed for things to get even better.

Great improvement has been seen in air quality over the last few years in the city. The implementation of European Directives and strict national legislation are big steps toward the environmental protection. Does the air pollution remains to be a major concern? How is the City Council trackling this issue?

We are committed by the agreement of Paris and we have managed to get funding for creating an observatory for the accomplishment of the targets set by the Agreement. Air pollution is a concern, but the city is doing well in promoting projects that minimize this effect. Thank God, we are a windy city, and the forces of nature are a strong ally.

Platforms are not the issue. There are so many platforms and networks out there. What we need is a better coordination among us.