Heraklion has a rich cultural heritage and a sophisticated, modern life that is evolving every day 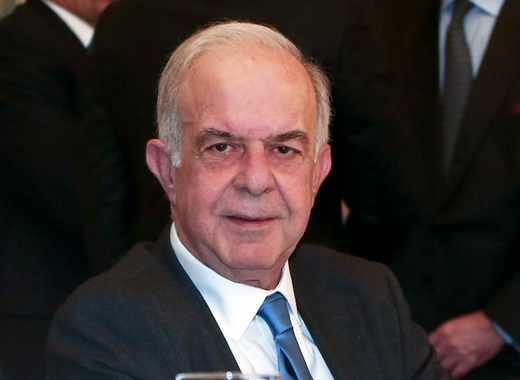 Vassilis Lambrinos was born in 1946 in Heraklion. He graduated from the 1st Junior High School of Heraklion in 1964. Initially, he studied Political Sciences at Panteion University and then embarked on Law studies at the University of Thessaloniki. He worked as a lawyer in Heraklion from 1974 until 2014.

In 1982 Lambrinos was elected City Councilor with the independent association of Fivos Ioannides. In this capacity, he was a member of the DEHAI Board of Directors until 1986, where he subsequently served as a citizen with special knowledge in the field, until 1990.

Mayor Labrinos, first of all, congratulations for being re-elected Mayor of Heraklion! In your opinion, what made voters choose you for another term?

Thank you very much. I think the citizens appreciated the work we did during the past five years – which was our first tenure – and wanted to give us the opportunity to complete it. Amidst very difficult economic conditions for the whole country, we managed to give Heraklion a perspective of growth during the period 2014 – 2019 through infrastructure and other major projects, some of which are still in progress. All of the above justify the election outcome, along with the fact that we have built a strong relationship of trust with our citizens. They know that they will never hear anything but the truth from us and that is crucial.

Please, describe the beautiful Municipality of Heraklion in a few sentences.

Heraklion is the city of 5+1 Civilizations, as we call it. The Minoan, the Arab, the Byzantine, the Venetian and the Ottoman civilization have left their mark in the history of Heraklion. These all coexist with the modern culture and create a very interesting palimpsest for every visitor. We have world-class museums and the imposing Knossos Palace on one hand, as well as excellent educational institutions, high quality human resources and a very lively day-to-day life, on the other. Briefly, Heraklion is a city with a rich cultural heritage and a sophisticated, modern life that is evolving and improving every day.

Heraklion is one of the Europe’s fastest growing tourism destination. How did you achieve this success?

We achieved that in collaboration with the tourist agents as well as other agents in Heraklion which play a role in the development of the tourist sector. And that is probably the key to success: the cooperation and coordination of all those involved in tourism in our municipality. We are constantly discussing with everyone - from the airport to the port and from tour operators to hoteliers - the problems they face, and we are working together to find solutions.

In addition, the construction of novel, appealing city hotels plays an important role in the tourist development of the city. Finally, the Municipality of Heraklion strives to create attractive events all year round for the visitors to enjoy while being here.

We put great emphasis on Culture as a tool for tourism development. In parallel, we host many world-wide sporting events each year, as we consider sports tourism to be another key factor in promoting Heraklion as a strong tourism destination and brand.

We still have a long way ahead before reaching our final goal. The extension of the tourist season and the establishment of Heraklion as a city-break destination are the key objectives of our policy. Still, we believe that in recent years we have made significant steps to achieve our aspirations.

What is Heraklion doing to attract investors and strategic projects?

At this moment, Heraklion’s historic center is being renovated, something that has never taken place before to such a great extent. Although we have come to face several problems along the way, part of the project has already been delivered, giving great commercial impetus to the area. When the project is completed, we believe that multiple benefits will be unveiled for the local market.

Our plans for the historic center also include the creation of an Open Mall, for which we collaborate with the Heraklion Trade Association. Also, we have an integrated Sustainable Urban Development Plan that emphasizes in local entrepreneurship.

Overall, we believe that Heraklion is a city with great potential for attracting investors, now that Greece is overcoming a long-lasting financial crisis. We believe Heraklion is very promising and we envisage our city as the metropolitan center of the Mediterranean.

In 2019 the inauguration of the Cultural and Conference Center of Heraklion took place. This project, which has been under construction for many years, has finally been handed over to the public. We have developed a high-level artistic program that we believe will attract even more visitors, both Cretans and also people from places outside of Crete. Our goal is for the Cultural and Conference Center to become one of the most influental in the Mediterranean.

At the same time, we place great emphasis on social policy and on improving the daily lives of citizens. As an example, we are currently replacing hundreds of kilometers of the city's obsolete water-pipe system with a new one, in order to solve the biggest and most long-standing problem of Heraklion city, that of water supply.

We also run modern and innovative waste management programs and we are trying to educate the public on recycling and on circular economy – areas at which Greece is still behind, unfortunately, in comparison to the rest of Europe.

Finally, we take advantage of all the financial tools at our disposal, including the European programs in which we are participating. Thanks to the excellent financial management of recent years, we have a strong municipal fund. Therefore, many of the aforementioned actions are funded by our own resources.

Since 2014, when I took over as a Mayor, I have often claimed that if “WE” do not change, the city will never change, consequently. So this is our main goal. To slowly change the dominant mentality in Heraklion for the better: to make citizens love their city a little more and to contribute creatively to its improvement. This is not an easy task. Still, as I have already mentioned, the human resources of Heraklion are excellent. Therefore, I believe that we will eventually succeed.

How do you evaluate the initiative of a unified platform for European municipalities and its main goal to keep European citizens informed about what is taking place in the European Union? How the portal can be useful to you and to the citizens of Heraklion?

I find it absolutely useful. Not only for the citizens of the European Union but also for us, as Mayors. Being informed about what is happening in other European cities, sharing information and know-how can only make us better. Thank you very much for your hospitality.

Find out more about Heraklion here.