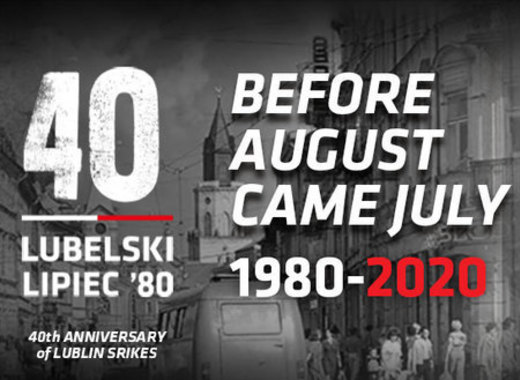 In 2020 Lublin is celebrating the anniversary of the 1980 events, a fortnight of workers’ strikes and popular unrest that preceded and, according to many, paved the way for the Gdańsk shipyard strike and brought about important democratic changes in the country. 40 years later, the largest city in Eastern Poland has already given the start of its commemoration programme that will last for several months.

Key moments of the official programme

Lublin has prepared a long list of events, lasting until 11 November, to commemorate the crucial actions that put it on the revolutionary map of Poland. These range from sports and culture events, through educational classes to official honorary ceremonies. Here are some of the key moments of the programme, as announced by Lublin City Hall and partners:

In July 1980, in response to a dramatic increase in food prices, the workers at the State Aviation Works PZL in Świdnik stopped working. Tens of thousands of workers from over 150 plants joined the strikes in Lublin and the region.

This wave of protests lasted from 8 to 25 July 1980. Eventually, a 'Strike Committee' signed an agreement with the communist authorities but the events sparked nation-wide protests with the momentous Gdańsk shipyard strike in August 1980 led by Lech Wałęsa. Those strikes led to the rise of the 'Solidarity' movement and ultimately - to the collapse of Communism in Poland.

The success of Lublin July opened the way for a Polish nationwide, democratic movement. What is more, the 1980s strikes and the unrest that followed not only changed the face of Poland but also that of the entire world stated the local authorities.