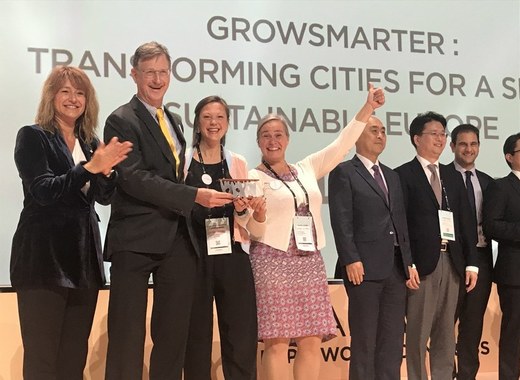 The City of Stockholm was named the world’s smartest city on November 20 during the Smart City Expo World Congress in Barcelona.

The deciding factor for Stockholm’s recognition was the City’s leadership in the European Smart Cities project GrowSmarter. The capital of Sweden has been leading the EU funded project since the beginning of 2015. Cologne and Barcelona are Stockholm’s project partners as Lighthouse Cities.

GrowSmarter has renovated more than 130,000 m2 in energy efficient ways, deployed 72 sustainable vehicles and much more to improve sustainability in its Lighthouse Cities. The project will present its results at a final conference in Stockholm on 3 December.

He thanked the staff in Stockholm and the cities of Cologne and Barcelona for their partnership.

“Stockholm is proof of what a connected, smart and sustainable city is. Winning the World Smart City Award is a testament to the huge journey we have been on both in the GrowSmarter project and in the City as a whole. That journey is never ending, but GrowSmarter has taken us an important step on the way,” project managers in the City of Stockholm Sigrid Granström and Lisa Enarsson said during the award ceremony.

The World Smart City Award recognises projects, ideas and strategies that promote sustainable urban development. This year more than 450 nominations were made from 54 countries. The award is divided into seven categories. The city award is given to a city with global strategies combining project initiatives and policy implementations for their citizens.

The other finalists in the city category were Bristol (UK), Curitiba (Brazil), Montevideo (Uruguay), Seoul (South Korea) and Tehran (Iran).

The Smart City Expo World Congress is Europe’s largest Smart City Conference with over 20,000 participants from all around the world. The conference is a forum to exchange ideas about smart cities and innovations of the future.