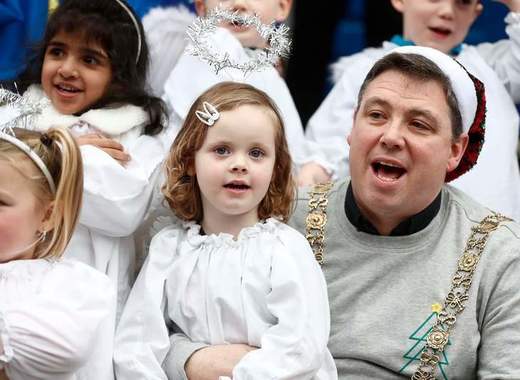 Seeing live animals in a traditional nativity scene is what a Christmas-themed film can typically offer. But instead of going to the movies, families with children who are visiting Dublin between now and Christmas Eve can simply go to the Live Animal Crib, set up at the historical Mansion House.

This year’s Live Animal Crib, a joint venture between Dublin City Council and the Irish Farmers’ Association since 1995, was opened on December 10 by Lord Mayor of Dublin Paul Mc Auliffe and IFA President Joe Healy.

The Crib, constructed by Dublin City Council’s Housing Maintenance Section, is a life-size stable housing a sheep, a goat and a donkey, provided and cared for by the Irish Farmer’s Association. The animals are brought in each morning and returned to a farm on the outskirts of the city each evening. The Dublin Society for the Prevention of Cruelty to Animals also helps with advice.

Lord Mayor Paul Mc Auliffe said at the inauguration, “The Live Animal Crib remembers the very first Christmas and reminds us of the peace and joy at this time of year. I would like to thank the Irish Farmers’ Association for their generous gift of the animals and their continuous care throughout their stay at the Live Animal Crib. I encourage all Dubliners – young and not so young – to come along to see the Crib and make a donation to the Mansion House Fuel Fund which provides funding for some very worthy charities to help those in need in Dublin.”

The Crib will be open from 10th December until 24th December 2019, from 11am to 5pm, except for Christmas Eve when it closes at 1pm. Admission is free but visitors are welcome to make donations to the Lord Mayor’s personal charity – the Mansion House Fuel Fund.

One of the oldest charities in Dublin, the Mansion House Fuel Fund was set up by Sir John Arnott in 1891 to assist needy Dubliners during a particularly hard winter. The surplus was carried over to the next year, so the fund remained viable to this day. The Mansion House Fuel Fund distributes cash grants through a number of Charitable Societies, including the St. Vincent de Paul, Dublin Simon and Abbey Presbyterian Church Hamper Fund.

So, if you happen to be in Dublin for the holidays with the kids in tow, you know where to go.