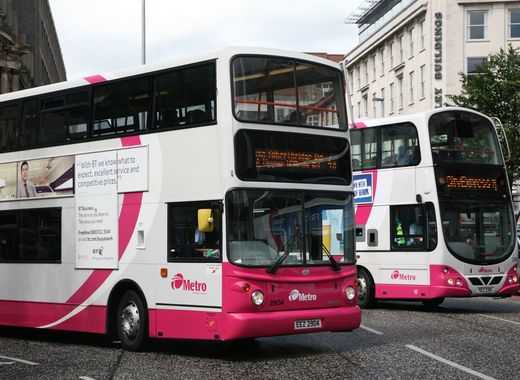 Ireland’s first hydrogen-powered double-decker bus will soon be on the streets of the city of Belfast.

The vehicle was procured thanks to the outstanding cooperation between the Department of Infrastructure and the Office for Low Emission Vehicles, alongside the companies Translink, Energia Group and Wrightbus.

Translink will be responsible for the fuel supply of the double-decker – it will be procured through the North Antrim on-shore wind farm, while Wrightbus has been tasked with procuring three additional vehicles, again powered by hydrogen.

Through their efforts, the project will also create the first-ever hydrogen refuelling station in the whole of Ireland.

During the contract signing, the Northern Ireland Minister for Infrastructure Nichola Mallon stated that “My role as Infrastructure Minister is to transform people’s lives, better connect communities across the island, ensure we have a thriving balanced economy and play our part in tackling the climate emergency. We cannot do that without changing how we as individuals travel and in government focusing on a low carbon future where we make low emission public transport accessible to people and communities across Northern Ireland.”

He further continued by stating that he and his colleagues have a responsibility to future generations who will be the ones dealing with the effects of the climate crisis. He believes that the procurement of Ireland’s first double-decker hydrogen-powered bus is a significant step in addressing the climate emergency and the project will play a key part in helping Northern Ireland reduce its own carbon emissions and thus become a greener and more environmentally-friendly place to live.

Earlier last year, the Scottish city of Aberdeen also made a massive purchase of similar vehicles – double-decker buses running entirely on hydrogen. According to the City Council, the buses will be instrumental in accomplishing the city’s climate targets and will play a key role in creating a cleaner future.