Ishøj is a charming, diversified, versatile and thriving municipality

Interview with Ole Bjørstorp, Mayor of Ishøj in Denmark 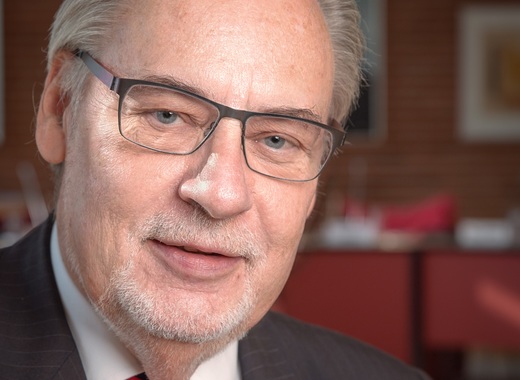 Ole Bjørstorp was born on 8 July 1946 in Malmö, Sweden. He has a MSc. in Political Science from the University of Aarhus in 1974. He has been working in the Copenhagen County Hospital Directorate from 1975 to 1978 and as a teacher at the LO School in Helsingør. From 1981 to 2000 he was a negotiations consultant at the Engineers Association in Denmark.

Bjørstorp was elected to the municipal council in Ishøj in 1982, and from 1985-2000 chaired the municipality's children's and young committees. From 1989 he was group chairman and from 1993 also vice mayor. Bjørstorp took over the mayor post in December 2000.

Stunning view of Ishøj from above

Please, describe the town of Ishøj in a few sentences. Which is your favorite place?

Ishøj is a small town about 17 km west of Copenhagen with about 23 000 inhabitants. The town has a coastline along Køge Bay and a fine sand beach with a view of the Øresund strait between Denmark and Sweden.

I would describe Ishøj as a charming, diversified, versatile and thriving municipality.

My favorite place in Ishøj is the ARKEN art museum. The museum is situated by the beach and is an architectural and artistic wonder.

Ishøj is one of the cleanest and greenest municipalities in Denmark. How did you achieve this?

I believe that many Danish municipalities have a big focus on nature and environment.

I was really impressed with the number of social programs that you are implementing. Please, tell us more about the most important of them and the collaborations with other institutions.

As you said, we have a wide range of social programs. For example, we have a very progressive program called “Mental Health in the Nature” because research has shown positive effects when using nature to restore mental health. The purpose of the project is to raise the abilities of such citizens concerning power of resistance, overall satisfaction with life, their desires to enter social arenas and their feeling of community and solidarity. The project aims toward showing and giving participants strategies to prevent stress, anxiety and depression.

Another of our programs is targeting citizens with acquired brain damage in Ishøj. In 2012 there was a political decision to implement a focus at citizens with neurological challenges, and today we are helping approximately 35 citizens. We offer individual support in the citizens' own home, group support and groups for relatives.

We also have a program for helping homeless people. In Ishøj, we have a group of approximately 50 homeless citizens that can be divided into two categories: temporarily homeless and long term homeless with significant social problems. We have built six residences with private entrance, kitchen and bathroom for the homeless. Each one is 40 square meters large and has a little garden. The citizens who live there have been without a home for over two years. In addition to being homeless, these citizens have problems within the social area, i.e. mental illness, present or previous abuse and they are often not able to live in a regular low-cost housing environment. The citizens who live there are estimated to be capable of living in their own home with flexible settings provided they receive social pedagogical support and therefore there are two caretakers/social education workers attached to them.

Share some of the good practices from your municipality. How do you finance them?

Ishøj has a wide variety of social associations, unions and clubs that gives our citizens the opportunity to be part of a community and raise their quality of life. Many of the associations are established and organized by volunteers in the local community. Ishøj municipality contributes to this commitment by creating and supporting efforts that bring people together and fight loneliness. This means that we start and support networks and communities that are needed on a local level in cooperation with volunteers and relatives. We believe that this kind of efforts can raise the mental health well-being of our citizens.

How would you evaluate the necessity of a portal that brings together the best practices of European municipalities and aims to keep the citizens informed about the latest developments in local policies, such as TheMayor.eu?

I find it quite obvious that we should all share our knowledge for the common good, and we are always open for new inputs. If other municipalities can learn anything from Ishøj, that would only make us proud.

What will be the main goals that you have set for the near future to make Ishøj a better place to live?

Currently, we are experiencing a big increase in our population. Thus, one of our main goals for the coming years is to build a number of new housing and residential areas. We also need to focus on new institutions and more recreational areas to keep making Ishøj a great place to live.

Find out more about Ishøj here