The story of how a young farmer diversified bee farm production 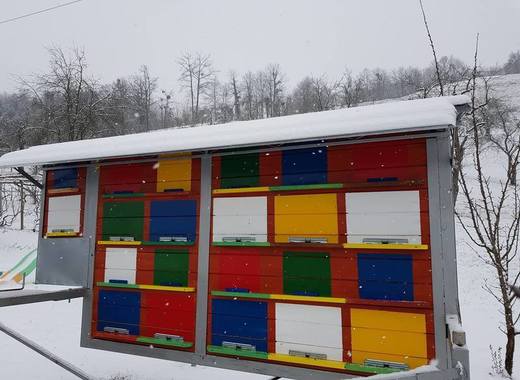 Science considers bees to be among one of the most important links in the food chain. A widely held belief is that if bees disappear, humanity will gradually lose all its sources of food and in turn also face extinction. Whether we believe it or not, is irrelevant. It is a fact, though, that the population of bees worldwide has decreased in the last few decades.

One project in Slovenia has undertaken the arduous task of developing the honey business and increasing the bee population through the traditional national craft of gingerbread making. The project started in 2016 and will continue until 2020. Its promoter is a young former accountant who decided to become a farmer and has developed an old bee farm with more than 30 years of traditions.

The project is co-financed by the European Agricultural Fund for Rural Development and the national budget and amounts to 45,000 Euros.

At the beginning of the project, the beehives were 62 and today they are 130, spread around various locations. The production of honey has increased almost two-fold in terms of types of honey and in terms of gingerbread – by more than 100%. It is clear, that the bee population has also increased and will continue to do so in the next years.

The business may have started with the production of honey and gingerbread but Darja Šolar has improved and diversified it. Currently, the farm takes part in different fairs and exhibitions and produces silk boxes with honey products, honey liqueurs, etc. complementary activities that will lead to an increase in the revenue in the coming years.

The main results from the project are not only in the above-mentioned. The touristic flow to the areas has also gone up due to many people who want to visit the farm. This contributes to the development of other businesses in the area. In addition, the good example Darja Šolar has set for the public will encourage other farmers in this particular area as well as across Slovenia to take advantage of the opportunities brought by an innovative approach and European funding.