Innovative solutions in Dublin nudge people to use public transport 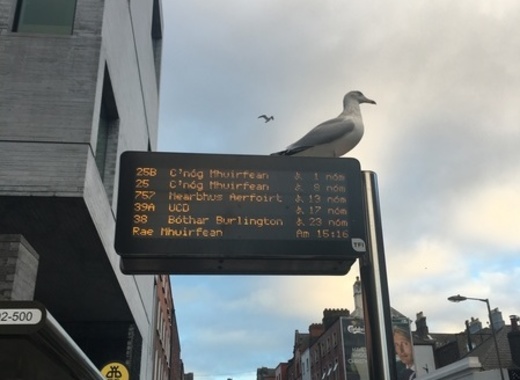 Despite being the capital of Ireland, Dublin is relatively small in size, which undoubtedly creates issues of space, due to the conflict between its vibrant business, academic and night life and the existing network of narrow roads and footpaths. In an attempt to accommodate public transport to the needs of a constantly moving local population and a significant number of tourists, the bus network, in partnership with the National Transport authority, have introduced several intelligent and innovative technological and mechanical solutions to the problems of traffic and space.

Dublin Bus services is the largest public transport company in Ireland, with roughly 130 millions of journeys annually. The bus networks, which includes 5000 stops, use Real Time Information in order to show you when your bus is due to arrive at particular bus stop so that you can plan your journey more accurately, using the bus apps or Google planner. Its accuracy is estimated to be among the highest worldwide and can reach as high as 96%.

Moreover, the double-deck buses are all provided with a free WI-FI network. An innovative Fuel Management System technology allows for more efficient use of fuel, which is going to be combined with an eco driving telematics system, assisting drivers with a more optimum fuel use, thereby reducing the environmental impact of public transport.