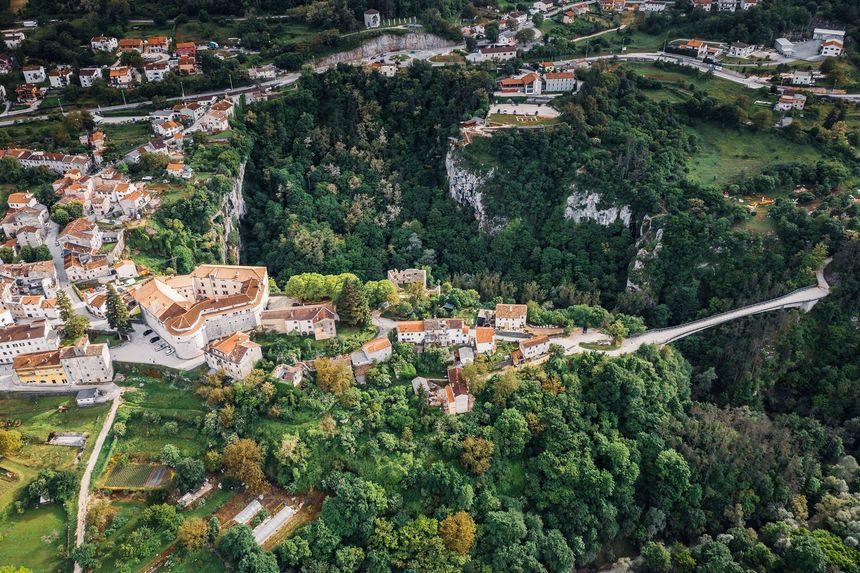 Traces of life in the Pazinčica date back to around 1,500 years before the new era. Pazin was first mentioned as a castle “Castrum Pisinum” in 983.

In the 12th century, Kaštel Pazin became the administrative centre of the Istrian estates of the Counts of Goričko, managed by their captains, and the most famous captain of Pazin, the vassal of Gorički, was Henrik Pazinski in 1250. The Pazinski-Pazin family took over Kršan at the beginning of the 14th century.

After the extinction of the Gorički family in 1374, Pazin passed into the possession of the Habsburg family, whose estates in Istria have been called the Pazin County since 1379. Since the 14th century, Pazin has played an important role in the events in Istria, divided between the Habsburg Holy Roman Empire of the German Nation and the Blessed Republic of Venice.

The Venetian army besieged Pazin several times, but managed to enter Kaštel only in 1508, when the entire County was conquered in less than 5 days in a powerful attack. Pazin was looted, and the walls damaged by cannonballs.

In the spring of 1509, the Habsburgs succeeded in regaining the lost territories, and the Venetians' attempt to retake Pazin in 1510 failed. Due to unresolved border issues, the Pazin region remained an area of ​​frequent quarrels even after the conclusion of several peace treaties. The conflicts were accompanied by the plague epidemic, the danger of Turkish invasions, and the great fire of 1584 in Pazin.

The Great Austrian-Venetian War broke out in 1615, and in the attack on Pazin in 1616, Stari Pazin was destroyed. In the summer of 1617, the Venetians attacked Pazin again, but the walls of Kaštela resisted the force of the attack of the mercenary Alvise Zorzi.

After the reconciliation, Istria lived in peace for the next two centuries. The weakening of Venice's role in international events was reflected in the weakening of its power in Istria.

The Republic of St. Mark experienced a final collapse in 1797 under the onslaught of Napoleon's army, which would soon occupy Istria. The French remained in Istria until 1813, when they were expelled from the Pazin region by a small army of Captain Josip Lazarić. The decisive battles took place in the vicinity of Pazin, around Lindar and Berm.

As part of Lazarić's victory, a flag was sent from Vienna to Pazin in 1813, which the imperial Vienna "gave as a gift" to the people of Istria, which is today kept as "Captain Lazarić's Flag" in the Museum of the City of Pazin.

With the abolition of the French administration, Austria took over the whole of Istria, which in 1825 became a single administrative unit, the Istrian district with its headquarters in Pazin.

Until 1918, the town under the name Pisino was part of the Austrian monarchy. In the same year, Pazin and all the Peninsola of Istria were transferred to the Kingdom of Italy.

Most of Istria became part of  Yugoslavia after WWII with the Treaty of Paris in 1947. In September 1993, Pazin was attacked and bombarded by Yugoslav partisans and subsequently became part of modern-day Croatia.

Pazin is the administrative centre of the Istria County. The population is around 9,000 people. Because of its central position and importance on the Istrian Peninsula, it is called the “Heart of Istria”.

The economic zones of Pazin offer great business opportunities with excellent infrastructure already in place and the municipality supports investors from the beginning of the project, as a reliable business partner.

Although tourism is not the main economic activity Pazin is progressively developing as an all-year eco-friendly destination where one can experience authentic flavors of local gastronomy, re-live forgotten traditions, relax, find peace, and mindfulness. 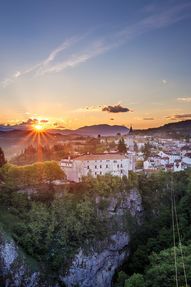 Pazin is known for its medieval Pazin Castle, the former residence of the Istrian margraves. It was rebuilt in the 15th and 16th century and disassembled in the 18th and 19th. It has been a museum since the end of  the WWII.