EU Commissioner Corina Cretu: Cohesion policy has been, is and must remain one of the strongest pillars of the European Union

“Cohesion policy alone created over 1 million jobs in Europe, that is 1/3 of all jobs created, and this in the midst of the worst economic crisis ever in Europe” 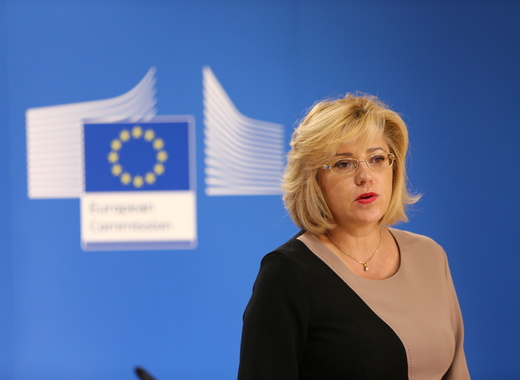 Corina Cretu is in charge of the EU's Regional and Cohesion Policy - something she’s described as "an essential element translating the solidarity that binds Europe together".

Commissioner Creţu, you are a strong supporter of the Cohesion Alliance. European Commission fights for an ambitious, sustainable and inclusive future of Europe. Could you explain to the European citizens why is so important the cohesion policy to continue to be 1/3 of the next EU budget for all regions and cities?

There are two issues to your questions. First, the Cohesion Alliance: I first thought of it in 2016; at the time, I felt that cohesion policy, being a unique, an amazing achievement in itself, deserved to be more visible across Europe. My idea was to bring beneficiaries of cohesion policy funds under one informal structure and speak on behalf of that policy. But for it to be a genuine grassroots movement, it could obviously not be coordinated by the Commission. Therefore, I asked then the Committee of the Regions to coordinate it, and I am grateful that they immediately agreed.

Today, this alliance has gathered some 5,000 signatories from everywhere in Europe and from the broadest possible range of sectors: cities and regions, of course, but also representatives of businesses, hospitals, universities, NGOs, trade unions…

Never before has cohesion policy brought together so many advocates.

Which brings me to the second issue in your question: there are a number of reasons as to why cohesion policy has been, is and must remain one of the strongest pillars of the European Union. Everybody agrees on the importance of its economic dimension (in the last period, cohesion policy alone created over one million jobs in Europe, that is one third of all jobs created, and this in the midst of the worst economic crisis ever in Europe). But it also has a strong social dimension; I often say cohesion policy goes where the private sector does not venture, and by that I mean we fund projects in poorer areas of sometime rich regions or cities, not only for economic reasons but to reduce the social fracture therein, to improve people's quality of life. Finally, thanks to its two above mentioned dimensions, and because it is so visible, cohesion policy has a tremendous political dimension: it shows Europe at its best, Europe at work in your streets, in your town or city.

For all those reasons, cohesion policy deserves strong financial resources.

How can you ensure effective spending?

This is a very sensible, very justified question. Indeed, the debate is not only about how much money to invest, it is also about how to invest it wisely and effectively. Let me start by discarding myths: with an error rate of 4%, that is a 96% error-free rate, cohesion policy can be proud of its record. Second, the current financial period introduced the concept of pre-conditions to be fulfilled prior to the authorisation to launch co-financed projects; those pre-conditions include the need to demonstrate that any project is needed indeed, will make a positive difference, will improve communities' lives. Finally, the Court of Auditors does its job: it constantly assess, beyond our own check and assessment mechanisms, not only how correctly our funds have been used, but how much impact they have. All this leads me to conclude that we are already doing a pretty decent job.

Can we get even further? Can we be even better? Of course! And this is why there is currently a whole debate on whether to tie EU funds to other parameters such as structural reforms for instance, or on how to strengthen synergies between various programmes and policies in order to "pull all in the same direction". The Commission's proposal for the future financial period, to be unveiled on 2 May will give concrete indications on this issue.

Have disparities between most and less developed regions increased or decreased?

Well, as 2018 is not over yet, we cannot say for sure yet, we'll have to wait till sometime next year to have a clear view on 2018. More importantly, I would refer you to the cohesion report we released last year. The report, published every three years is a genuine "snapshot" on the state of cohesion in Europe. The conclusions and findings of the report are manifold, but let me highlight some for you.

The report shows that the recent economic and financial crisis increased those disparities that had been shrinking till then, with some regions having weathered the crisis better than others, including within member state. It also shows that, roughly speaking, the poorer regions, mostly in central and eastern Europe have experienced a higher growth rate than some traditionally richer regions, mostly in western Europe (in France, Germany, Sweden, Italy to name but a few). This a crucial finding as this type of regions caught in a "middle-income trap", based their economy on industrial output and are now struggling with globalisation and new technologies. This is why, last December, I launched the "regions in industrial transition" initiative to help them literally reinvent themselves economically. Addressing existing and growing disparities will be a key economic and political challenge for the future.

What is the EU's biggest challenge and how can we strengthen the European future?

I have just mentioned one here above: globalisation, relocations, new technologies are one of those challenges. And cohesion policy will play a crucial role in how well we will manage them in order to make Europe's economy stronger in the long term. Brexit is another one, especially as the EU budget will lose one of its major contributors of course. I would also agree with President Macron's statement at the last European Parliament's plenary session in Strasbourg: we must find a way to address the rise of parties with authoritarian trends; the European Union was created to be the beacon of democracy and solidarity, a rallying cry for those values, and it must remain so.

I am convinced that one way to do this is to show a more caring face of Europe, to show a Europe that looks after everybody that leaves no one behind. And again, this is a stage on which cohesion policy can have the leading role, through its work with local authorities and stakeholders on the ground, through its projects that concretely improve people's lives.

What do you think about the portal of the European municipalities and its main goal to make and keep European citizens better informed about what is taking place in the European Union?

The idea to have a portal that focusses on European municipalities and keeps European citizens informed on what is taking place, on the ground, across the EU is great. I also like the friendly-user layout and structure of it as in one click you can find projects and events taking place in any member state.

TheMayor.eu has already started to organize the awards “Mayor of Europe”. The main goal of the event is to recognize the significant work of the local authorities and to promote and support city strategies, projects and ideas that can potentially improve their citizens’ life. Do you think that the European mayors need such recognition?

There has already been a "world mayor" award for some 15 years now, but to have a similar award at the European level is great. This goes along the lines of our traditional "RegioStar awards" that reward the best cohesion policy funds in various categories: it is about putting in the limelight local achievements. To reward mayors (and therefore their team as well) for concrete, tangible achievements in their city or town helps show the dynamism of Europe's local level and boosts the exchange of best practice. Everybody's a winner!