The first settlements in the area - whose toponym derives from the Latin adjective Agathianum, predial by the nobleman Agathius - date back to Roman times, as evidenced by the discovery of remains of burials and other objects. The scarce documentation does not, however, allow us to closely trace the history of the village from the early Middle Ages to the XIII century.

After being sacked by the army of Federico II in XIII century, Agazzano become part of the properties of the noble Scotti family, whose lordship, established itself with Alberto Scoto and strengthened in the XV century with his nephew Giovanni - who assumed the title of Count of Agazzano.  He made the village of Agazzano the most important center of the valley.

The rule of the Scotti continued until 1412 when, accused of rebellion by the Arcelli, noble owners of lands in the Val Tidone and allies of the Visconti, were deprived by Filippo Maria Visconti of the fief of Agazzano and other goods, which were sold to the Arcelli. Shortly after, however, having proved their innocence, they were reintegrated into their possessions which, in the first half of the XV century, also included the castle of Agazzano.

The struggles between the Scotti and the Arcelli culminated in 1652, when the former, after having been exiled from the Duchy of Parma and Piacenza and deprived of their assets, were reinvested in the county of Agazzano. The fortress is well preserved, flanked by an XVIII century residential building, built on part of the foundations of the ancient castle.

The castles of Boffalora and Bastardina are the only remains of a vast defensive system, which arose in the high-hilly area between the XIII and XIV centuries, when the most violent clashes took place between noble families for dominion over these areas. Noteworthy are the parish church (built in the XVI century but remodeled in the late XIX century), the sanctuary of the Madonna del Pilastrello and the Anguissola palace.

Agazzano is a municipality, located in the Province of Piacenza in the region Emilia-Romagna in Italy.  It is situated about located about 20 kilometres of Piacenza and 150 kilometres northwest of Bologna. The population of 2,055 people is on an area of 35.9 square kilometres.

The industrial sector is represented by companies operating in the automotive (with factories specializing in the production of accessories and engine and vehicle parts), food (in particular dairy) and construction sectors. The tertiary sector is made up of the distribution network (not of a particularly significant size but sufficient to meet the primary needs of the population) and the set of services. 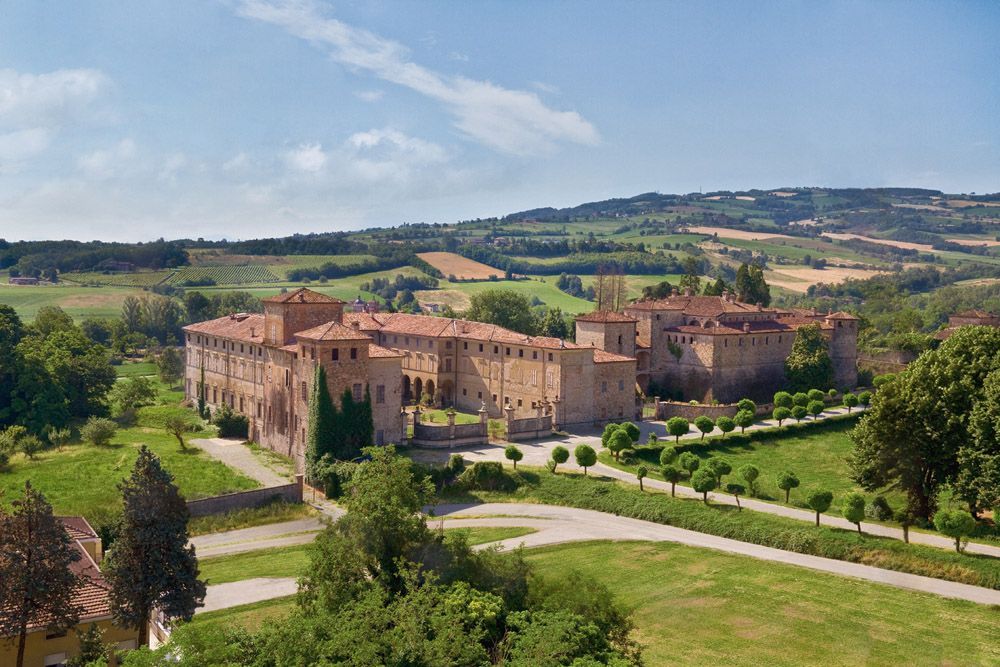 The Castle of Agazzano is an ancient property (13th century) of the Scotti family, who still today dominate it with the princess Luisa Gonzaga Anguissola Scotti. The edifice is accessible through two opposite flights of stairs, overlooks a very suggestive courtyard and represents a synthesis between the austerity of medieval defensive architecture and the elegance of the Renaissance mansion.

The castle is still privately owned and has belonged to the same family (which over the centuries have subjected it to expansion) since its creation, that is, from the end of the 1200s. The castle was restructured at the end of the XVII century in a peaceful noble residence, furnished with period furniture and housing elegant pictorial decorations and precious frescoes.