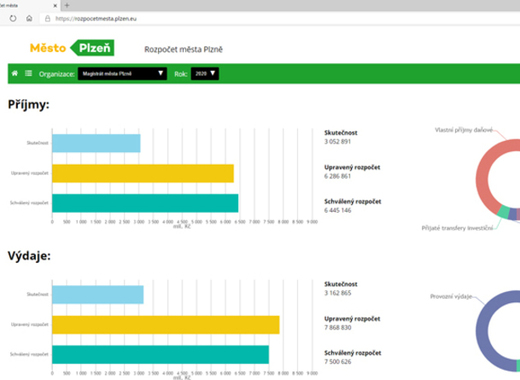 Pilsen has recently unveiled an online portal allowing for more transparency on how the municipal budget is spent. The so-called “clickable budget”, launched last week, gives a detailed overview of public funds management in the metropolitan city. The authorities claim that it is intuitive, allows for an easy search, and is replete with visual tools, such as graphs, timelines and more.

The new website preserves the structure of the city budget in its classical form. In addition, it is complemented with graphics, it is linked to the economic information system and it is automatically updated every month.

It is possible, among others, to check the status of an investment project, timeframe, project documentation and implementation, main suppliers, link to the contracts registry, total costs and graphics, as well as a representation of the financial performance for the entire duration of the project.

According to Mayor of Pilsen, Martin Baxa, as quoted on the municipal website: “This clearly fulfils our current attempts, as a local government, to be as transparent and open as possible, even when it comes to the management of public finances. In Pilsen, we launched an application called the Clicking Budget in 2015, which enabled citizens to get a basic overview of the city budget as a whole, as well as separately for the municipality and the city districts. However, with this new application we are going into even greater detail and interconnection”.

Pilsen is currently planning approximately 8.8 billion crowns in expenditures in its 2020 budget. The money is intended for operational costs and investments.

In terms of revenue, the city expects 6.4 billion crowns for this year. Pilsen is expected to cover the negative balance mainly with the surpluses from previous years.