The town of Roman occupies a strategic position in the centre of the historical and geographical region of Moldova, a convergence zone for many important European, national and regional communications.

The name of the city was taken from Moldovian Voivode Roman I of Moldavia, believed to be its founder. Roman's first son was Alexandru cel Bun. From here prince Roman has carried out the centralization of Moldavia, Roman city being capital of the Lower Country of Moldavia.

The earliest mention of the city is in the Novgorod Chronicle (dated between 1387 and 1392). Five years later, the name appeared on a donation deed. The city is mentioned in a Moldavian document, signed by Moldavia's Voivode Roman I, on March 30. The document is one of the first of the then-young state of Moldavia, the first which holds a fully legible version of the Moldavia seal, bearing the aurochs, the moon, the star, and the flower - symbols still in use on the Coat of Arms of Moldova. 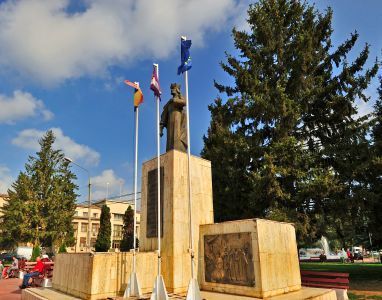